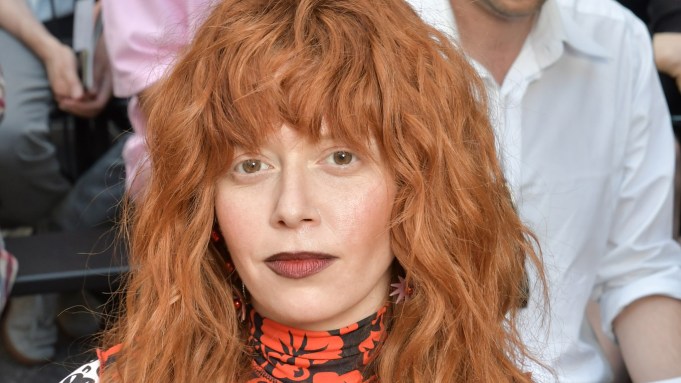 “I don’t know this man,” Natasha Lyonne of “Orange Is the New Black” said as director Spike Jonze nudged her while they sat in the courtyard of a Parisian high school for the Kenzo show. “I don’t know if you heard, but I’m like a director now. This [kind of interview] is sort of about my directing career now and I’m kind of trying to manage it. The last thing I need is you…” she told him in jest. “Second-guessing your answers?” he interjected.

Lyonne, who recently directed a movie for Kenzo’s fall 2017 collection, soldiered on despite Jonze’s line of questioning. “Honestly, I was trying to make something that would make Spike happy, Carol and Humberto happy. Thinking about Carrie’s film. Insane company to keep. Luckily, nobody said ‘Do your thing’ to me,” she revealed. “What did they tell you, do somebody else’s thing?” Jonze asked, intent on finding out more. “Yeah, they said do [your] thing,” she answered him archly, but with a smile.

“I’ve only seen the stills, but they were cool. Beautiful,” Jonze judged. This compliment earned him absolution for his cheekiness in the form of a brilliant smile from the red-headed first-time director.

Next to them, model Camille Rowe was about to open up about her projects when Lyonne piped up with “Sure!” Laughing, the Poison Girl face said Lyonne had enough projects for both of them and that she was heading to Corsica to see her family for the summer. “Funny, I was just looking for a trip there,” her red-headed neighbor added. Packing some Kenzo and Lyonne, then? “100 percent,” Rowe laughed.