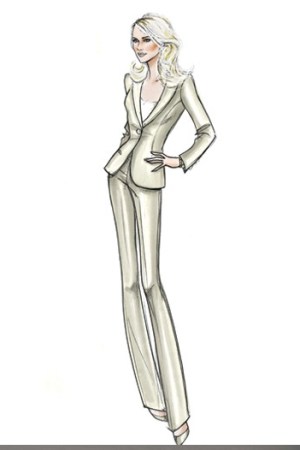 SPY STYLE: Valerie Plame Wilson, the former CIA agent whose outing caused a scandal for the Bush administration, has a thing for Giorgio Armani — she even treated herself to a jacket by him the first time she spoke in public for the Congressional hearing. The costumes in “Fair Game,” Doug Liman’s new movie on the Plame Affair, stay pretty true to real life. Armani worked with costume designer Cindy Evans and designed several looks for Naomi Watts, who plays Plame Wilson in the movie, which just opened. The skirt suits and jacket-and-pant ensembles take their cues from Plame Wilson’s original wardrobe — which is something she is quite pleased about. “Giorgio Armani’s clothes are modern and feminine, always making me look my best and confident,” Plame Wilson said. “This became even more important when I found myself, reluctantly, placed in the public eye.”

This story first appeared in the November 8, 2010 issue of WWD. Subscribe Today.

MODEL BEHAVIOR: She has a cameo in Woody Allen’s in-production Parisian flick, “Midnight in Paris,” and now France’s First Lady Carla Bruni-Sarkozy is testing out her on-screen interviewing technique. The former model was tapped to interview Jean Paul Gaultier for a documentary about the designer helmed by former house muse and couture director Farida Khelfa and director Tonie Marshall. Still in production, the documentary is due to be aired in the New Year as part of TV channel France 5’s “Empreintes” series, though a time slot has yet to be set.

PALACE INTRIGUE: The famous Crillon hotel on Place de la Concorde in Paris is changing hands, but the new owners remain a mystery. U.S. holding company Starwood Capital has sold the luxury palace to unnamed Saudi investors for 250 million euros, or $355 million at current exchange rates, market sources said, confirming a report in French daily Le Figaro. A spokeswoman for Starwood declined to comment. The group purchased the hotel from the Taittinger family in 2005.

TARGET’S NEW DESIGNER: Target recruited Rachel Pally to design an exclusive dress available at its online Red Hot Shop this month. Pally said the retailer ordered around 250 pieces of a version of her best-selling full-tie tube dress in plum with a black floral print. Target’s price is $79.99, although similar dresses regularly top $200 at other stores that carry Rachel Pally. “My brand welcomes everybody’s look,” said Pally, explaining why Target tapped her design skills. The Target dress is a case in point. It can be worn several ways, including strapless or as a skirt. “It is flexible, with age range and personal style. It is a great canvas to add your own flair,” said Pally.

LEATHER FOR WARHOL: Andy Warhol set the style in the Sixties with his leather jackets, jeans, wraparound shades and Beatle boots. Now the Sisley brand of the Benetton Group has picked up on the look by commissioning an exhibit of 18 hand-painted motorcycle jackets to benefit The Andy Warhol Museum in Pittsburgh. The jackets and other works of art from Warhol’s own collection that are part of the museum’s permanent collection will be auctioned today at Christie’s in New York in coordination with the online auction at CharityBuzz.com. “Just as our avatar Andy Warhol was quick to respond to the temper of his times, the Sisley brand has always caught the current trends,” said Thomas Sokolowski, director of The Andy Warhol Museum.

ALL GRAY: Cameron Silver, Taryn Rose and Monique Lhuillier were among the guests Wednesday night at a party to celebrate the opening of Gray Gallery, a showcase for jewelry and art on Melrose Avenue in West Hollywood, Calif. The brainchild of cousins Paris-based interior designer Chahan Minassian and Los Angeles-based jeweler Vram Minassian, the 1,600-square-foot Gray Gallery houses works from ceramicists Antoinette Faragallah and Peter Lane, new jewelry from Vram Minassian and Lara Koulajian, and vintage jewelry from the likes of Gucci, Cartier and Boucheron curated by dealer Ineke Peskin. Prices in the store range from $2,000 to $500,000-plus. “The concept of Gray was to juxtapose Chahan’s life onto mine,” said Vram Minassian.

NEW TO SCAD: Carmela Spinelli has been tapped as the new chair of SCAD’s School of Fashion, with her debut slated for January.

She will be responsible for developing new curriculum, enhancing the school’s educational, professional and recruitment opportunities in New York and Paris, and overseeing the fashion faculty at the Savannah and Atlanta locations, among other things. Most recently, she was chief creative officer and executive vice president of Three Wildcats, a privately held company, which develops and manages unique boutique luxury and fashion store brands. In this newly created post, Spinelli will be based in Savannah and will report to SCAD’s fashion dean Michael Fink.

In other campus news, Rachel Roy, Chris Benz and Christian Cota have been recruited to serve as the school’s 2010 fashion mentors.

WATCH MAN: Actor and musician Bryan Greenberg helped Casio kick off the opening of the Casio Premier Timepiece Exhibit and the launch of the Edifice Black Label Collection at Tourneau Timemachine in Manhattan Thursday night. From the cult favorite G-Shock and Baby-G to the more technical pieces, the exhibit showcases the array of offerings from the watch company, complete with interactive touch-screen displays. “As a man who doesn’t wear jewelry, watches are a classic way to show style,” said Greenberg, who plays a fashion designer on the television show “How to Make It in America.” Greenberg will next appear alongside Mila Kunis, Justin Timberlake and Emma Stone in “Friends with Benefits,” scheduled to be released in July, and just wrapped “The Normals,” an independent movie about a group of people who test psychiatric drugs. With all that going on, Greenberg also is going on tour with his band beginning in December.