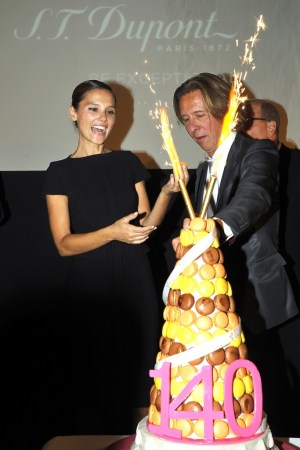 HISTORY REPEATING: S.T. Dupont celebrated its 140th anniversary and its latest collection, a tribute to Audrey Hepburn and Humphrey Bogart, Thursday evening with a reception at the Hôtel de Crillon in Paris.

To fete the occasion, Sean Hepburn Ferrer and Stephen Bogart, the respective sons of the two cinematic icons, joined with French actress Virginie Ledoyen, done up to look like Hepburn and sporting one of the bags from the collection.

When asked if her appearance — both visually and physically — presaged a closer collaboration with the brand in the future, the actress coyly quipped: “We’ll see.”

Ledoyen said she will start filming a movie by Emmanuel Mouret in two weeks’ time. “It’s a love story between a man and two women,” she revealed.

S.T. Dupont’s Night Symphony limited-edition tribute collection reinterprets leather goods made to order for the Hollywood actors in the Forties and Fifties. Each is accompanied with a matching lighter and pen.

A collection launched last September by the brand already involved a tribute to Hepburn.

“Both of our parents were actually customers. We wouldn’t have done it unless there was a real link historically. Otherwise, it becomes a purely commercial thing,” Sean Hepburn Ferrer commented.

S.T. Dupont, best known today for its luxury lighters and pens, started out as a trunk maker back in 1872. When industry veteran Mounir Moufarrige joined the company as vice chairman in 2009, he led the push to bring its history back to life, relaunching a collection of leather goods a year ago.

“The response has been positive, because I think people are responsive to the history, which is guiding them to the product,” he said at the event.

S.T. Dupont president Alain Crevet added that the true acceleration of the brand begins now. “We’ve opened a leather goods workshop in Faverges, our main site of production where we make the lighters and pens,” he said. “Now, we are moving onto the next stage, through the collaboration with Audrey and Humphrey, launching a full new line of leather goods.”

The brand’s rebirth is accompanied by a renovation of its retail network, Crevet explained. Flagships in Paris and Hong Kong have already undergone renewal, and others will be renovated in coming months, with a focus on China.