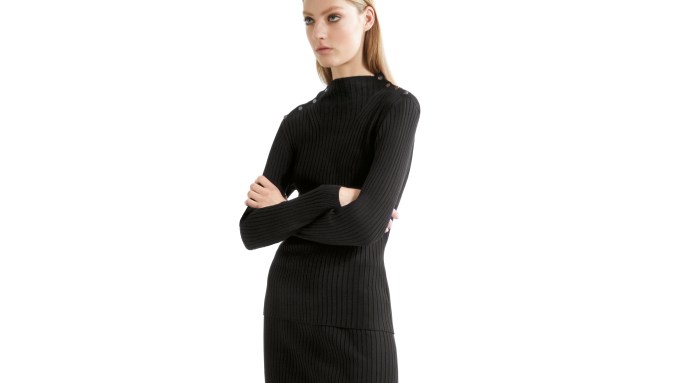 St. John’s design team set out to put a new twist on some of the knit house’s classics. The result is The New Standard capsule collection due out in October.

“It was just feedback from our customers, especially regarding what they wore to work or wore to the office, and also just very honestly looking around at what the women I work with wear today,” said St. John senior vice president of design Greg Myler. “Nobody’s wearing a power suit. Nobody’s wearing a particular uniform. Everybody’s dressing in a very appropriate and modern and eclectic way. The object was to build a capsule collection that best describes the perfect 15 go-to pieces for a professional, working woman.”

Thus, it’s in keeping enough with St. John’s heritage as a designer knitwear company to still resonate with the existing customers but modern enough to potentially pull in a new customer, Myler said. That’s always been the balancing act for the company, which has rolled out new collections and campaigns — including ones with Angelina Jolie and Kate Winslet — in the past in a bid to breathe some freshness into the brand and turn the heads of new customers along the way.

The classic St. John knit dress that has long been the company’s halo product and the item that launched the brand in 1962 is reimagined for The New Standard as a knit top with button detailing and asymmetric skirt. A knit bouclé jacket is dressed up with chain detailing that can be styled with more modern pieces such as leather leggings or wide-leg pants.

“Globally, there’s so many brands and so much product. Our customer, she really doesn’t have time to go to a store. A lot of them work very closely with wardrobe specialists so they don’t really have time to go through the racks,” Myler said of the reason for having the pieces live as a separate capsule. “Anything new or interesting we like to identify [with a separate label] because it’s all about making it easier for the customer.”

St. John has introduced a number of sub-collections throughout the years, including Caviar and last year re-launched St. John Sport with a resort collection.

The New Standard is not to be confused as basics simply because all of the pieces are black either. The idea moving forward is to continue to update the pieces as trends change and based on the needs of the market, Myler said.

The capsule will be merchandised as a stand-alone concept within St. John boutiques and will also be offered at wholesale.

For More on St. John in WWD:

St. John to Cut 130 as it Retools Factory Workforce