Stanley Tucci, Jeremy Irvine and Bianca Jagger were among the guests. 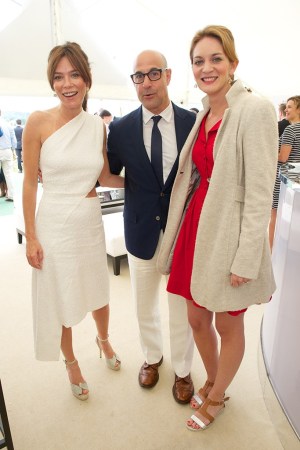 ON THE TROT: England’s long-awaited spring sunshine bore down on stars gathered for the St. Regis international polo match at Cowdray Park in West Sussex, England, on Saturday.

“I love it here. Felicity [Blunt] and I have lived in London for about six months,” said Stanley Tucci, referring to his wife. “I usually wear a lot of Hugo Boss, but I didn’t have anything for a day like today — a British social event in the country — so this is all Brooks Brothers,” added the actor, pointing to his navy blazer and white linen trousers.

Tucci, who plays Caesar Flickerman in “The Hunger Games,” was disappointingly without the dental prosthesis and nuclear tan for which Flickerman is known.

“They were my idea,” he said. “I just felt that the character needed them.”

As the match between South America and England began, Blunt, in a red Nanette Lepore dress, greeted actress Anna Friel, who wore a white Osman dress with cutouts.

“I have been filming ‘Urban and the Shed Crew,’ in which I play a crack addict,” she said. “I had to lose a lot of weight for that, which was annoying because I had gotten really ripped and muscly while training for ‘Odyssey,’ where I play an officer in an NBC action drama. We’ve only shot the pilot, so I’m going to have to get those muscles back.”

Bianca Jagger, who was wearing a Gucci suit, said she’s been busy putting together a charity auction and gala that will take place in the new Phillips gallery space in London’s Berkley Square during Frieze Art Fair in October.

“Number 1, 2 and 4 — in that order,” quipped model Jack Guinness as he eyed the South American team when they took to the podium during the presentation.

“Poor things,” replied Jade Parfitt. “They’ve just worked so hard, and here we are assessing their attractiveness — and not their prowess on the pitch.”