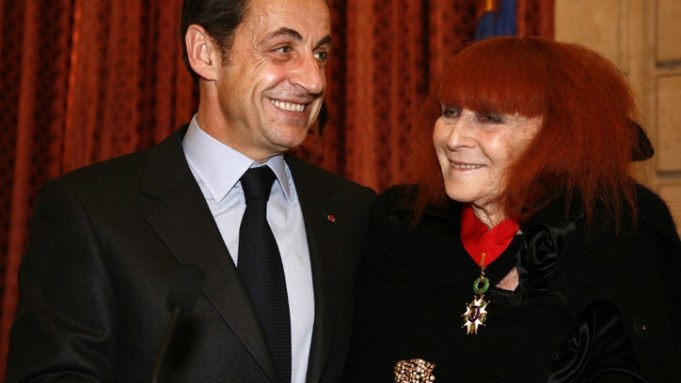 STARS AND STRIPES: He may have kept everyone waiting as he tied up official state business, but it didn’t take French President Nicolas Sarkozy long to win over the fashion crowd as he decorated designers Sonia Rykiel and Jean-Louis Scherrer in a ceremony at the Elysées palace Wednesday evening. “Even I know you’re famous for stripes,” said Sarkozy as he praised Rykiel in a speech before making her a commander in the French Legion of Honor. “You are terribly French,” he continued of Rykiel. “We need more free spirits like yours to turn our habits on their heads. Our country is too conservative.” Meanwhile, Sarkozy told the crowd how Scherrer was “emblematic” of the Seventies. “You contributed to French elegance,” he said. “What more can one wish from life than to achieve something?” The likes of Ines de la Fressange, former French prime minister Lionel Jospin, writer Christine Orban, Anouk Aimée and Claudia Cardinale were among the glitterati that then congratulated the two designers on their honors.

MONEY HONEYS: The Bank of England may be grappling with the plummeting pound, falling interest rates and the worst financial crisis to hit Britain since the Depression, but somehow it’s found the time to instruct female employees on how to dress. According to a memo leaked to WWD from the bank’s Dress for Success Day, which took place earlier this week, the BOE has some very clear ideas about the look its employees should be working in these critical times. “Look professional, not fashionable; be careful with perfume; always wear a heel of some sort — maximum 2 inches; always wear some sort of makeup — even if it’s just lipstick.” Shoes and skirt must be the same color. No-no’s include ankle chains — “professional, but not the one you want to be associated with;” white high heels; overstuffed handbags; an overload of rings, and double-pierced ears. It sounds as if women at the BOE could be in need of a rescue package.

HEART TO HEART: Stefano Pilati will be spreading the love — along with limited edition cotton tote bags and heart-shaped USB keys — come Valentine’s Day. That’s the drop date for the latest issue of Yves Saint Laurent’s popular “Manifesto.” More than half a million copies of the catalogue will be distributed on the streets of Paris, New York, London, Milan, Tokyo and Hong Kong, with 2,000 in each city tucked into the USB-festooned bag. (On each key are images of the ad campaign starring Claudia Schiffer, and a making-of in Hollywood with photographers Inez van Lamsweerde and Vinoodh Matadin. Giving this issue a playful tone, it features stickers, allowing readers to move around Schiffer, and the iconic Hollywood sign against which she poses, at will.

RAGS AND BONES: Shaking the skeletons out of her closet, French actress-cum-singer Emmanuelle Seigner has designed a pair of limited edition cowboy boots for Celine decorated with a couple of waltzing Mexican skeletons, said to be inspired by her husband Roman Polanski’s 1967 movie, “Dance of the Vampires.” The boots, along with a leather hobo bag featuring a colored leather rose motif, are due for release early next month, each retailing for 1,500 euros, or about $2,000 at current exchange. Having featured in the house’s fall 2008 campaign, shot by Bruce Weber, Seigner designed a tai chi line for Celine for last summer.

CHAIR TREATMENT: For the past few days, Bloomingdale’s held a silent auction of Bernhardt chairs customized by Diane von Furstenberg, Tory Burch, Marc Jaocbs, Anna Sui, Donna Karan, Michael Kors, Ralph Lauren, Monique Lhuillier and Zac Posen. All proceeds of the auction, as well as 10 percent of a limited edition Bloomingdale’s chair priced at $1,485, will benefit the CFDA Foundation, and Wednesday night, Bloomingdale’s Michael Gould, Macy’s Inc.’s Terry Lundgren, Elle Decor vice president and editor in chief Margaret Russell, CFDA executive director Steven Kolb and Anna Sui came out to fete the auction. All the extra attention on the auction, which ended Thursday night, seems to have paid off. By Thursday afternoon, the highest bid was for the Michael Kors chair at $10,000.