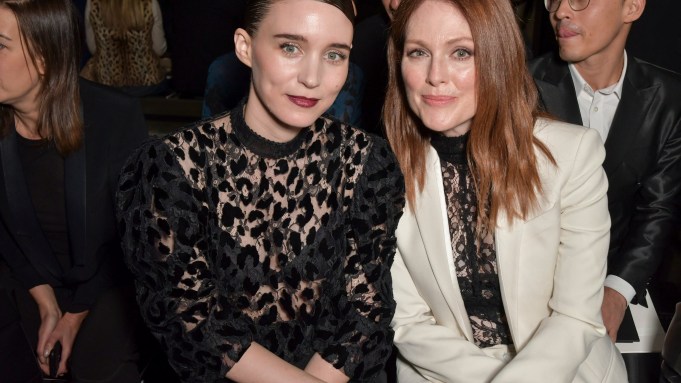 PET SOUNDS: Collections aside, Clare Waight Keller for her Givenchy debut Sunday impressed guests with her choice of venue: the Paris Law Courts.

“It’s so spectacular, imagine working here every day,” marveled Julianne Moore making her way down the marble-floored corridor to the show space, set in a cavernous hall with rose windows. “How great is Clare, right? This is really, really exciting, the first woman to head a major couture house. It’s pretty impressive to see,” added the actress. When asked if she was into cats, which feature in Waight Keller’s recently released teaser of her vision for the house, Moore replied: “I have dogs.”

On her heels, Fergie revealed she was a cat woman. “My first pet was a cat, his name was Sneaky — and I’m always a fan of a cat eye,” purred the singer.

“Apparently a lot of the series that we’re watching at the moment were shot here,” marveled Natalia Vodianova, who also weighed in on the pet talk. “Antoine [Arnault] wanted to offer me a kitten two years ago, but I chickened out because I have young children.”

Rooney Mara looked a little overwhelmed. “This is my first time at Paris Fashion Week and I’m very excited and anxious to see the show. It’s totally different to the film world, you can’t even compare,” said the actress, who was reunited for the occasion with her “Carol” costar Cate Blanchett.

“It’s spectacular,” said Fan Bingbing, who was glowing following her recent engagement to Li Chen. “I’m so happy,” she said, adding that the nuptials would probably take place next year — though the location has yet to be determined. The actress stars in Chen’s directorial debut, the war movie “Sky Hunter,” released in China on Friday.

Californian rock band Haim was expected to play at the after party, though sisters Este, Danielle and Alana were playing coy. “I don’t know, you’ll have to come to find out,” teased Este, adding that the trio has a new music video directed by Paul Thomas Anderson coming out on Monday.

“He’s everything. We’ve been collaborating with him since the beginning of this record cycle. We did a documentary with him about the making of our record, and so he’s been kind of our guardian angel throughout this process. And we’re going on tour starting next year — a full-fledged world tour,” she revealed.

After the show, Lily Collins and Pedro Almodóvar shared their impressions of the collection, with Collins saying it is “100 percent” something she would wear. “I even loved the men’s wear, with the British rocker-chic vibe. And I loved the feminine lace and the boots, there was a hard and soft element to it,” said the actress who is about to start filming the J.R.R. Tolkien biopic, “Tolkien,” helmed by Finnish director Dome Karukoski, in which she plays Edith Tolkien.

Almodóvar loved the looks with pleats and big shoulders “with a Seventies vibe.” “Look at the space, fashion shows are real shows,” said the director. “They take place in such a small, intense space of time but can be so dramatic and rich. Here, I loved being the spectator.”