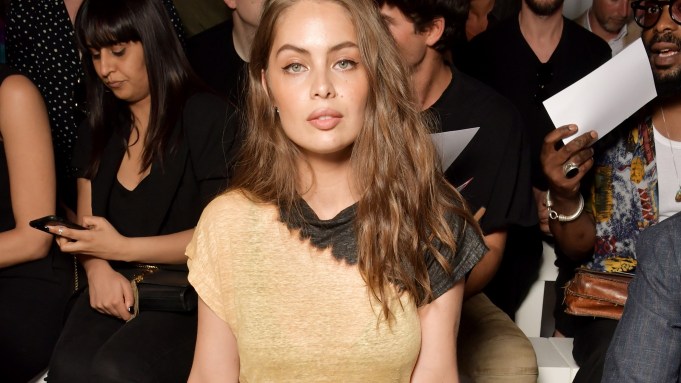 DOUBLE DAZZLE: At Balmain, the French stars of ballet and theater competed with the designs of Olivier Rousteing for the audience’s attention as he showcased a very Gallic collection in the gilded décor of the hotel Potocki.

Fresh from the performance of “Renaissance”, a 27-minute ballet for 16 dancers choreographed by Sébastien Bertaud with costumes by Balmain, principal dancer Dorothée Gilbert, one of the star dancers of the Paris Opera, was a vision of grace in a Balmain creation, an emerald green draped jumpsuit.

“You can dance easily in Balmain, and the costumes catch the light beautifully. The weight did take a few rehearsals to get used to,” the prima ballerina said. “Unfortunately, the costume department kept everything. I could so see myself in that little bolero jacket with a white tee and jeans. I should have made a run for it when I was wearing it!”

Off the stage, she is to appear onscreen as Emma, a ballerina in “L’Essence d’une Etoile,” a short film with Catherine Deneuve and Pierre Deladonchamps. Having been submitted to several festivals and picked up for broadcasting by France 3, one of France’s public service channels, it serves as a teaser for a feature-length version of its storyline.

Bertaud, who is also a dancer, was already thinking about new projects between the Opéra de Paris and the fashion house, whose artistic director impressed him with his awareness of current mores.

“Olivier brings a generational outlook, by being so connected to today’s world. Fashion and dance are the same: precious, sophisticated, but fragile and ephemeral. To come alive, they need the right place at the right time, with the right people. It’s a new page to be written, but we need to start now,” he said. “The public was very receptive to [the performance], and Balmain sublimated bodies in complete coherence of style and spirit.”

Another performer was feeling empowered by the brand. “To me, [Balmain] is women who at ease with their life, their sexuality, their body,” said French model and actress Marie-Ange Casta. “Something that fits all women. Not just young actresses, all women. It’s not easy to speak up, but it’s a nice path to follow.” The actress plans to make her theatrical debut in a play by French playwright and director Laurent Laffargue.