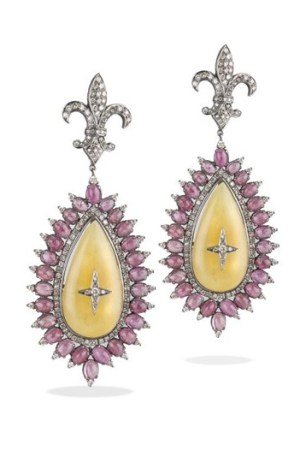 CALLE ME: Loewe’s creative director, Stuart Vevers, has designed a limited edition Calle bag, in sapphire-blue napa leather, as an exclusive to the brand’s just-launched e-commerce site. The online boutique is initially open to Spain (except for the Canary Islands), Portugal, the U.K. and France. As an extra incentive for customers to buy online, meanwhile, the brand is offering no delivery charge until the end of April.

OLIVIER’S TWIST: Since leaving Nina Ricci earlier this year, Olivier Theyskens has kept a somewhat low profile, but that could soon change.

Christopher Burch, who is developing his own lifestyle brand, and Caroline Brown, the president and chief executive officer of that venture, are said to be in talks with the Belgian designer to create another retail concept. Few details were available, and the company declined comment. For Theyskens, it would mark a return to the fashion spotlight. While waiting for his next design gig, he has penned a book about his work called “Olivier Theyskens, The Other Side of the Picture.” It is due out from Assouline in February.

DECISION TIME: A Paris judge is to rule today on the future of Christian Lacroix — and the news is not expected to be good. Sources said the two main suitors for the troubled couture house — an Ajman sheikh and Bernard Krief Consulting — have yet to come up with proof of financing for their relaunch plans. Lacroix’s owner, Florida’s Falic Group, has tabled a restructuring plan that could see the workforce cut to about a dozen from some 110 employees, reducing the 22-year-old fashion firm to a licensing operation.

SAY CHEESE: Photographers Inez van Lamsweerde and Vinoodh Matadin are finally checking out what life is like on the other side of the camera. Word has it the Dutch duo, with the focus on Matadin, star in Lanvin’s men’s wear campaign for the spring — and photographed it, too. The shoot took place in Paris over the weekend.

ART AFFAIR: Francois Nars is bringing his 15X15 Project to Art Basel Miami. On Wednesday, Nars will kick off an exhibit of the portraits — 15 celebrities, including Marc Jacobs, Daphne Guinness, Dayle Haddon and Amber Valletta, each made up and photographed by Nars — at a cocktail party at Andre Balazs’ The Standard Hotel Miami. The portraits will remain on display at the hotel through Dec. 6. The project, which celebrates Nars’ cosmetic brand’s 15th anniversary, is also available in book form from Chandelier Creative through mid-December, with 100 percent of the proceeds going to charities chosen by each celebrity. To further leverage the project, Nars has created an iPhone application, out now, which allows users to insert their own faces into the makeup looks he created for the celebrity portraits.

A GRIPOIX TALE: Gripoix, the Parisian jeweler known for its pate de verre, or poured glass pieces, which, in its 140-year history has supplied brands including Chanel, Balmain, Dior, Givenchy and Lanvin, has unveiled its first store on London’s Mount Street. Marie Keslassy, who acquired the jeweler in 2006, said she chose the location after falling in love with the building that houses the store, a former pharmacy that dates from 1840. Keslassy has made a feature of the old-world fixtures and fittings in the listed building. The boutique houses the six jewelry collections Keslassy has designed — all of which are based on Gripoix’s archives — and a made-to-measure service. Keslassy is planning to add another element: A Gripoix fragrance is set to launch early next year.

PAINT IT JADE: Mick Jagger, Bianca Jagger, L’Wren Scott and Bella Freud were among guests who helped mark the launch of Jade Jagger’s first boutique, in Notting Hill, last week. The Jade Jagger Studio sells jewelry, clothing and works of art. “I wanted it to be cozy and for it to feel like an extension of my own home, and at the same time a little bit sexy and boudoir-y,” said Jagger, whose creations are displayed within vintage cabinets and cases set against dusky pink walls. Prices range from 25 pounds, or $41, for a ring featuring an enamel lips motif, to 2,400 pounds, or $3,958, for a velvet Raj-inspired coat at the store.

OTHERWISE ENGAGED: On the heels of her October nuptials, Ivanka Trump is unveiling her New York Proposal Package. With the purchase of any diamond engagement ring from Trump’s Madison Avenue fine jewelry store, clients will receive a complimentary stay at either Trump International Hotel & Tower New York overlooking Central Park or the Trump SoHo New York, which opens in February. The newlyweds will receive a three-course dinner and bottle of Champagne at Jean-Georges or Trump SoHo’s Quattro Gastronomia Italiana. “We understand how challenging it can be for men to not only shop for a ring, but plan the perfect way to pop the question,” said Trump. “We are offering the ultimate experience to relieve any stress our clients may feel and make the process enjoyable as well as offer a comprehensive education. We will plan everything. All he has to do is ask.”

JAEGER’S SPORTING MOMENT: Jaeger is helping British athletes mark their off-the-field appearances in style. The company has teamed with United Kingdom Athletics to dress male and female athletes and the UKA’s board members in Jaeger clothing. As part of a four-year partnership, Jaeger will dress athletes who win medals in major championships for award ceremonies and events. “As a British brand celebrating our 125th anniversary, Jaeger is delighted to be working with such a leading organization as the UKA and supporting our athletes in the international arena,” said Belinda Earl, Jaeger group chief executive officer.