Photographed by Jeremy Scott, the model is the face of the new Moschino Toy 2 Bubble Gum scent.

STELLAR FACE: NASA’s Perseverance rover might have successfully touched down on Mars last month, but Moschino’s creative director Jeremy Scott ditched robots in favor of model Stella Maxwell for his own space mission.

In the colored images, the model poses with the scent’s signature teddy bear-shaped bottle, this time rendered in a flashy pink tone that matches her manicure and bubble gum balloon. The images will be flanked by a short, playful video showing Maxwell on the move in an abstract outer space.

“I had a vision of the bottle flying through outer space like a rocket and from there I thought: ‘Wouldn’t it be fun to turn Stella into an astronaut, having her grab the bottle and spritzing herself in zero gravity?'” said Scott to WWD.

Asked about the appointment of Maxwell as the face of the scent, Scott said the model “has been a muse of mine for quite a long time and when I was conceptualizing the campaign for the fragrance, I knew no one else would be able to bring this bubble gum pop feeling alive like her.” 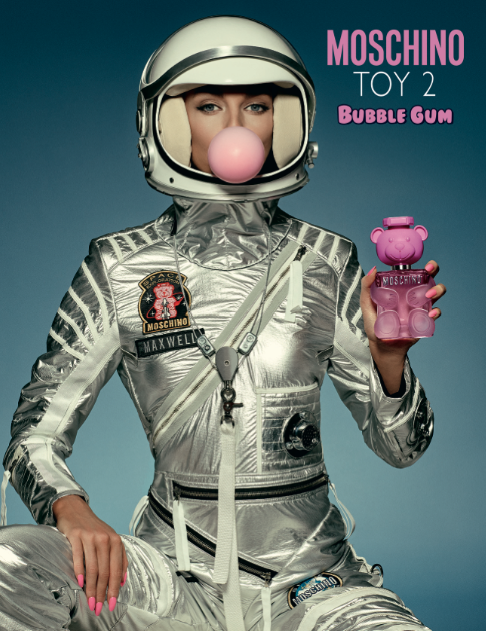 The designer photographed and directed the campaign himself, and teased it on Instagram with a post shared with his 2.4 million followers on Tuesday. Recounting the experience on the set, Scott admitted that “working with your friends is always a ball. Our best memories are always inside jokes, and best friends never tell!”

Manufactured by licensee Euroitalia, Moschino Toy 2 Bubble Gum is a flanker of the Toy 2 fragrance that was released in 2018. At the time, the scent marked an expansion of the Toy family introduced in 2014 but it came with new packaging, switching Toy’s furry teddy bear with a glass bottle with opaque finishes instead.

A floral and fruity eau de toilette, Toy 2 Bubble Gum has a vegan juice blending candied citrus fruits with a bubble gum accord on top; peach flowers, Bulgarian rose and ginger powder at the heart, and musk and cedar wood essence in the dry down.

The fragrance will hit the shelves of selective perfumeries in Europe and Russia in mid-March, consequentially rolling out in the U.K. and Asia in April and the company plans to launch the scent in the Middle East in June. China Euroitalia signed an exclusive deal with Sephora. According to Euroitalia’s president Giovanni Sgariboldi, the perfume will be distributed in 10,000 doors globally in its first year.

Available in three formats, the edit will retail at 49.50 euros, 69.50 euros and 90 euros for the 30-ml., 50-ml. and 100-ml. sizes, respectively. In addition, a namesake bath line comprising a perfumed bath and shower gel, a body lotion as well as hair mist will flank the scent.

Besides Moschino, Euroitalia produces perfumes for the Dsquared2, Missoni and Versace fashion houses, in addition to owning the Reporter label and the Naj-Oleari makeup brand. Last year, the Italian manufacturer acquired the Atkinsons 1799 and I Coloniali labels from Morris Profumi, which merged with Selective Beauty creating the Perfume Holding company in 2010.