Stella McCartney Awarded an Order of the British Empire

Queen Elizabeth II presented the designer with the OBE at Buckingham Palace in London on Tuesday. 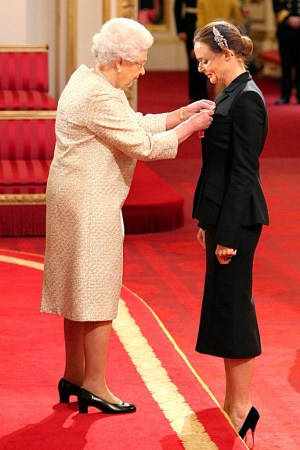 ROYAL BLUE: Stella McCartney was awarded an Order of the British Empire from Queen Elizabeth II at Buckingham Palace in London on Tuesday. McCartney donned a bespoke navy suit of her own design and a headpiece made from two Cartier jewels — one a family heirloom — sewn together by Philip Treacy. She wore the jewels with an antique veil she bought when she was 15 years old at a vintage fair. The designer attended the ceremony with her husband, Alasdhair Willis. “To receive an Order of the British Empire from the Queen is overwhelming. I feel proud, and blessed to be here,” McCartney told WWD. “This is the kind of moment in one’s life that feels surreal. I am so grateful for this honor.” The OBE is the latest addition to a roster of accolades over the past few months: McCartney won Designer Brand and Designer of the Year at the British Fashion Awards in November.