The capsule collection will support the British charity that works toward ending poverty through entertainment and laughter. 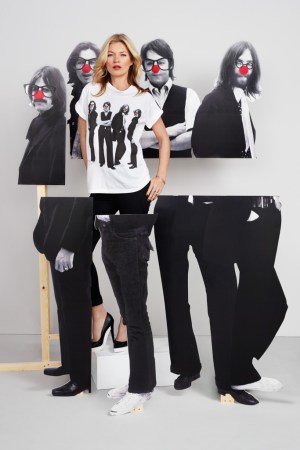 STELLA HA HA: Stella McCartney has designed a capsule collection of T-shirts in support of Comic Relief, the British charity that works toward ending poverty through entertainment and laughter.

They feature great British comic Tommy Cooper, The Beatles, Marilyn Monroe and Kate Moss, all sporting red noses as a reference to Red Nose Day, a fundraising telethon that will be held on March 15 this year. The campaign for the Tees was shot by McCartney’s sister, Mary, and Helena Christensen, and features Moss and British comedian David Walliams (aka Mr. Lara Stone) urging people to “do something funny for money.”

The T-shirts were manufactured in Africa using 100 percent organic Fairtrade certified cotton sourced from co-operatives in Mali. They are available in TK Maxx stores in Britain from Jan. 31, and cost 6.99 pounds for a children’s tee to 14.99 pounds for an adult tee (about $11-$24 at current exchange), with all profits going to the charity.

“I love Comic Relief. I think it is an incredible charity,” McCartney told WWD. “I am a huge supporter of it in so many different levels, and it was important and rewarding to see the success of the first set of designs I did a couple years ago, and the amount of money that they helped to raise. It helps so many causes and if you can afford to give, then give, because there is nothing better to do with your money than helping others.”