"Sing, Lulu, sing!" Kate Moss urged Sixties pop-star Lulu, who was among a host of Stella McCartney's friends outside the designer's store in London. 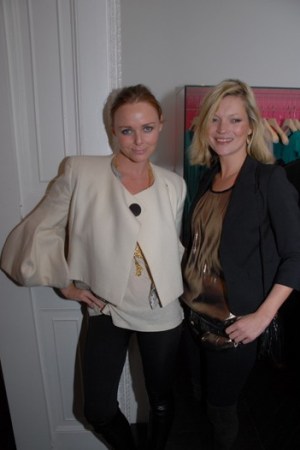 LIGHT BRIGHT: “Sing, Lulu, sing!” Kate Moss urged Sixties pop-star Lulu, who was among a host of Stella McCartney’s friends gathered outside the designer’s Bruton Street store in London Monday night for the yearly switch on of her holiday lights – and a few rounds of Christmas songs. Lulu finally relented and sang the first two lines of “Run Run Rudolph,” to thunderous applause. “That’s all I can remember,” said the Sixties songstress sheepishly, as she handed back the microphone.

This year, British comedian Peter Kay – dressed as his alter ego Geraldine McQueen, a wannabe pop star – was the celeb on hand to flip the switch. When he did, the store was lit up with a cheekily gaudy display of an illuminated Father Christmas, stars and reindeer. Paul McCartney also obliged with a musical turn. He and Kay led the crowd, who included Katie Grand, Laura Bailey and Moss’ rocker boyfriend Jamie Hince, in a rendition of his hit “Wonderful Christmastime,” as an embarrassed Stella McCartney covered her face with her hands at her father’s impromptu contribution.

“Another high brow event at Stella McCartney,” said the designer with a smile. “And now we’re all off to the bingo” quipped Kay. Later, guests crammed into the store to warm up with mince pies, star-shaped “Stella,” cookies and mulled wine.