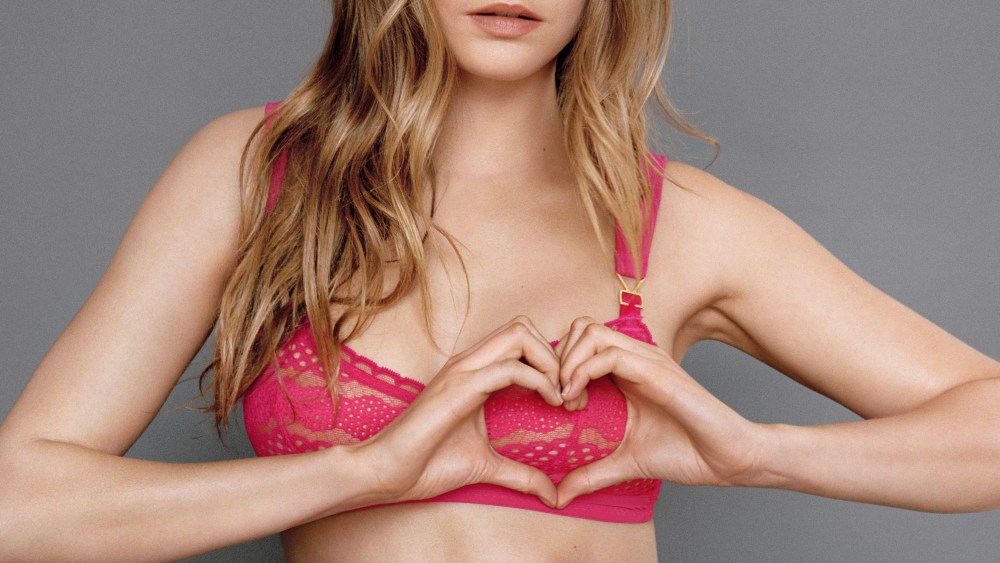 The designer has created the Alina Playing range — a balconette bra, a soft-cup bra and a bikini brief, all in the same shade of hot pink. A percentage of the profits from the range — which retails from $55 for the briefs through to $110 for the bras — will be donated to three breast cancer charities: the Linda McCartney Centre in Liverpool, England, part of the Royal Liverpool University Hospital; the National Breast Cancer Foundation in the U.S., and the National Breast Cancer Foundation in Australia.

McCartney has tapped Cara Delevingne to appear in a campaign shot by Sean Thomas to mark the launch, which pictures Delevingne wearing the set and making a heart shape with her hands at her chest. McCartney said Delevingne “represents a generation of young women that we are really trying to reach,” adding that she hopes the campaign, to launch on McCartney’s Web site and social media channels, will “inspire all generations of women to be aware of breast cancer and be aware that preventing it is the most positive approach.” Last year, Kate Moss served as the face of McCartney’s campaign.

As another part of the campaign, McCartney will launch Louise Listening, a post double-mastectomy compression bra. The design is fashioned in soft cotton in a light rose shade, and is designed to reduce discomfort during the healing process after surgery. The bra takes its name from McCartney’s late mother, Linda Louise McCartney, who died in 1998 after being diagnosed with breast cancer. McCartney said of the design: “We wanted to bring something beautiful and feminine into a bra that is taboo…something that allows women undergoing [a mastectomy] to have something to be proud of, something with no shame attached.”

All proceeds from the sale of the Louise Listening bra will benefit the Hello Beautiful Foundation, a London breast cancer charity founded by Jane Hutchison, a survivor of the disease. The proceeds from the bra, which retails for $125, will go toward funding the foundation’s new London center for women with breast cancer and their families, which will focus on promoting a “healthy, nontoxic lifestyle.”

The Alina Playing range will be available to buy on McCartney’s Web site Thursday, along with retailers including Net-a-porter.com, Barneys New York, Bergdorf Goodman, Saks Fifth Avenue and Neiman Marcus in the U.S. and Harrods and Selfridges in London, while customers can pre-order the Louise Listening bra on McCartney’s site on the same day.