The social media backlash has been swift toward real estate developer Stephen Ross.

The developer behind Hudson Yards, Ross is facing criticism from celebrities and fashion designers over news that he is reportedly hosting a fundraiser for President Donald Trump at his Hamptons home on Friday. According to The Washington Post, tickets for the fundraiser range from $100,000 to $250,000.

Ross is also the chairman of real estate company, Related Cos., which owns SoulCycle and its parent company, Equinox, and is the owner of the Miami Dolphins. Many celebrities, including Chrissy Teigen, Sophia Bush and Billy Eichner, have taken to Twitter to express their outrage over Ross’ fundraiser, taking aim at his many companies.

Fashion designers have also joined in the outcry, including Prabal Gurung, who posted a three-part Instagram Story to call out Ross for supporting the president following the two mass shootings that took place in Texas and Ohio this past weekend, which many Democratic presidential candidates have claimed were caused by Trump’s racist rhetoric. Ross’ Hudson Yards is also speculated to be the new home of New York Fashion Week, according to multiple sources. Ross is also married to jewelry designer Kara Ross. 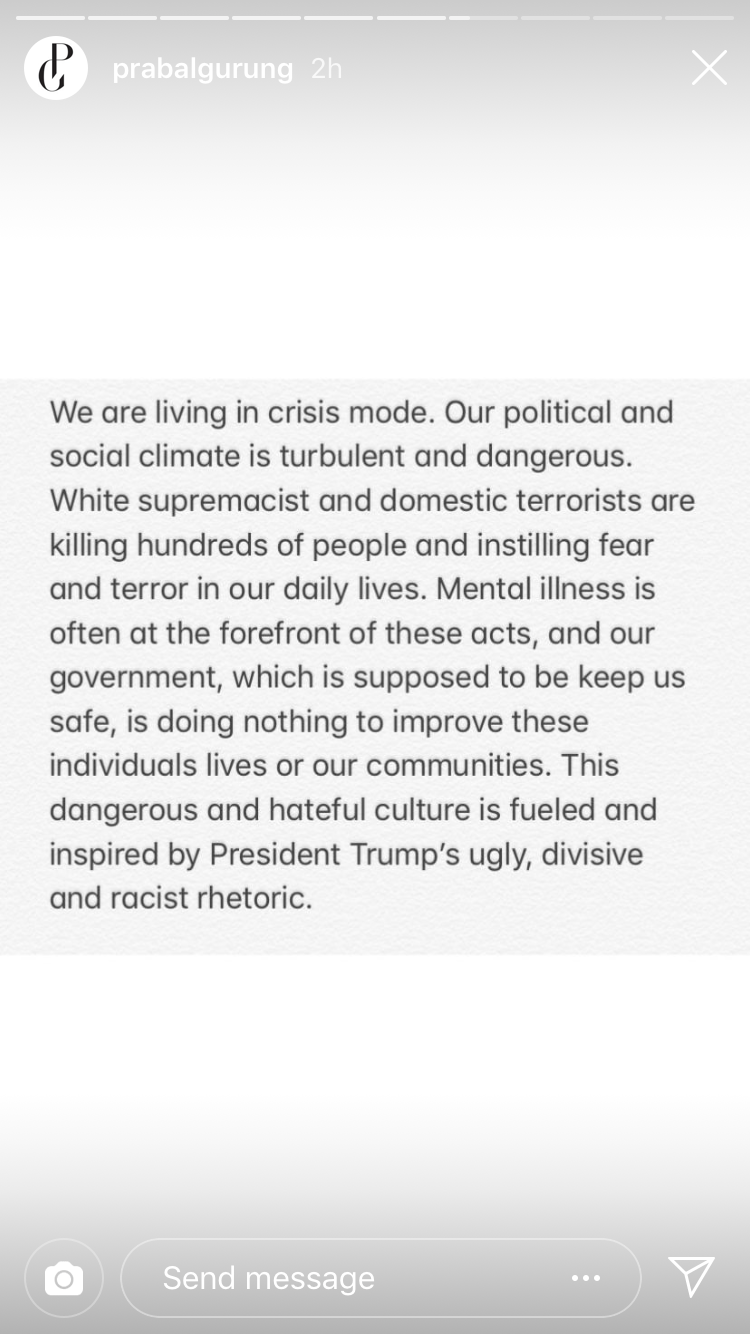 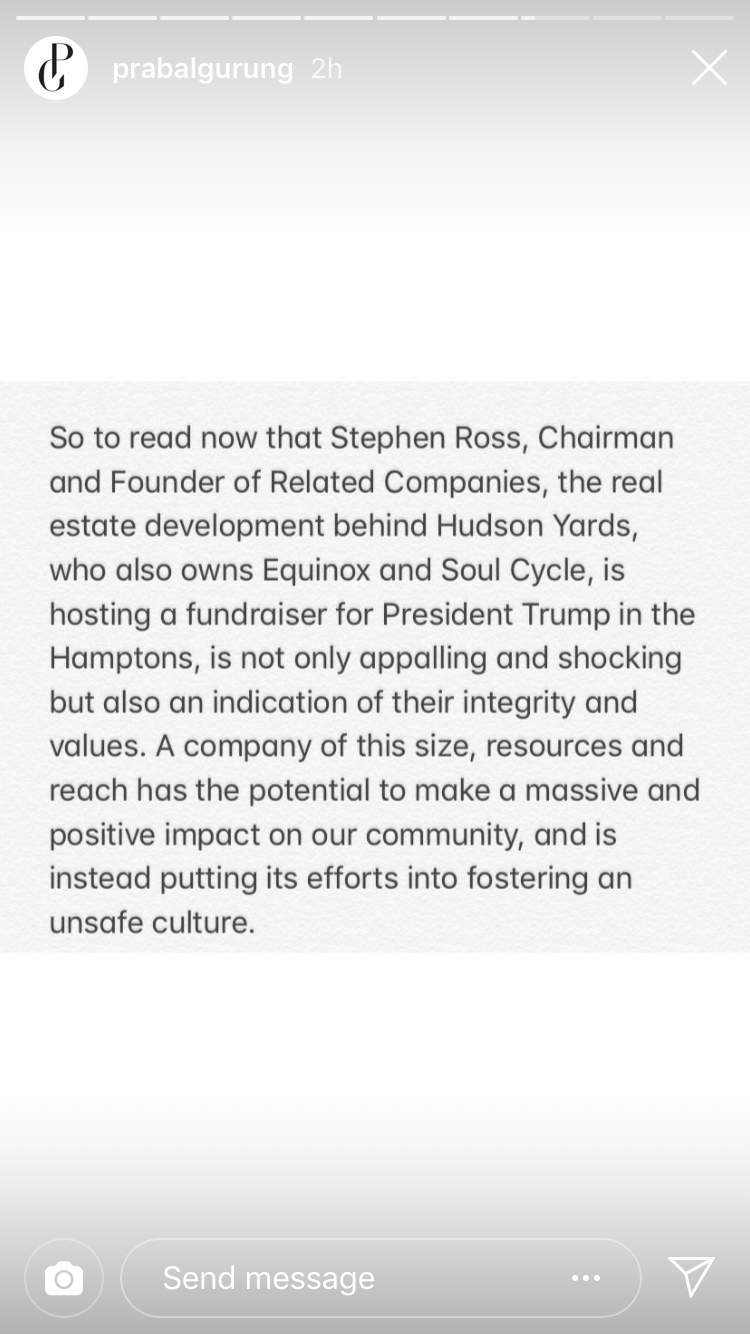 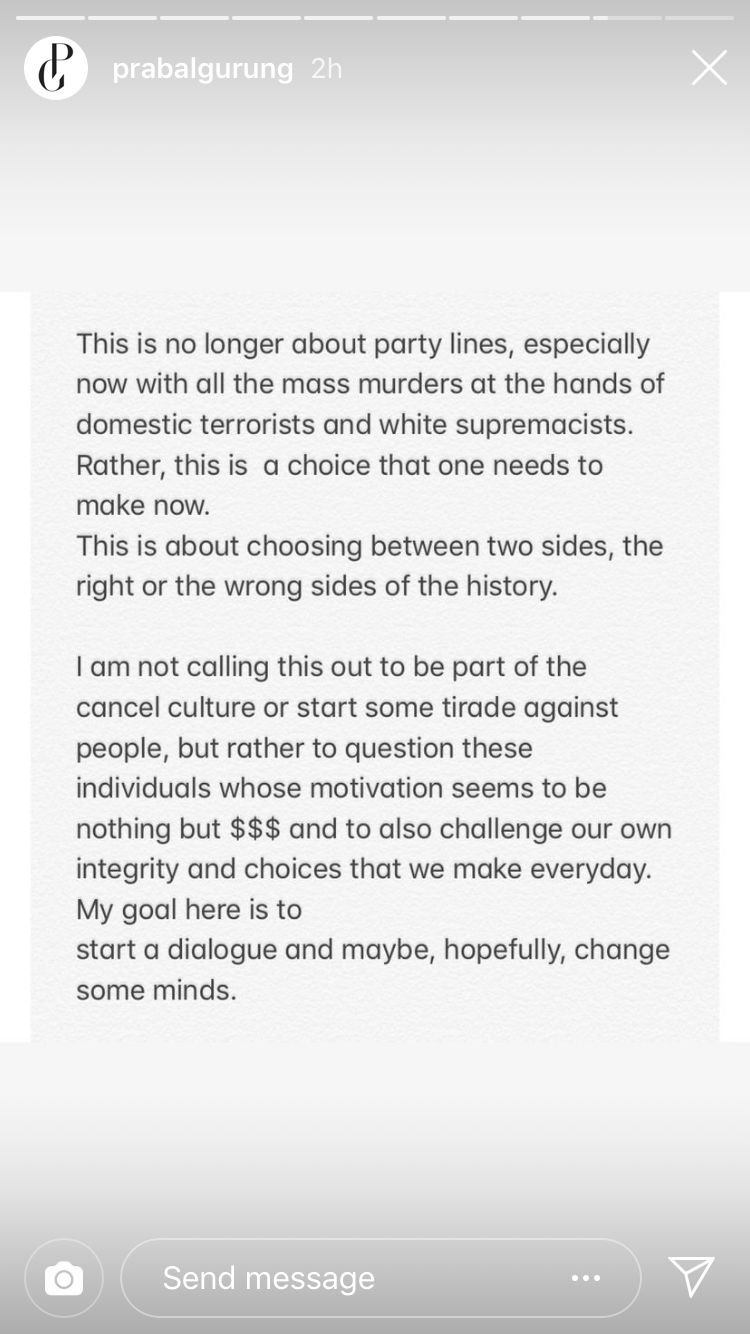 Despite the company’s link to Ross, SoulCycle’s chief executive officer, Melanie Whelan, issued a statement on the controversy on SoulCycle’s Twitter account Wednesday, stating “SoulCycle in no way endorses the political fundraising event being held later this week. SoulCycle has nothing to do with the event and does not support it. Consistent with our policies, no company profits are used to fund politicians.”

A note from our CEO pic.twitter.com/UwxBWR76B0

FYI I’m hearing designers for #NYFW are being offered Hudson Yards/the Vessel as a show space. Please, please: Don’t give this man any more publicity or funds. https://t.co/S1UvKIjuqx

The same Stephen Ross holding that $250,000-a-head Hamptons fundraiser for Trump is also a minority investor in Momofuku. David Chang has seen plenty of controversy but not, so far, this kind.

SoulCycle and Equinox are cancelled until further notice. 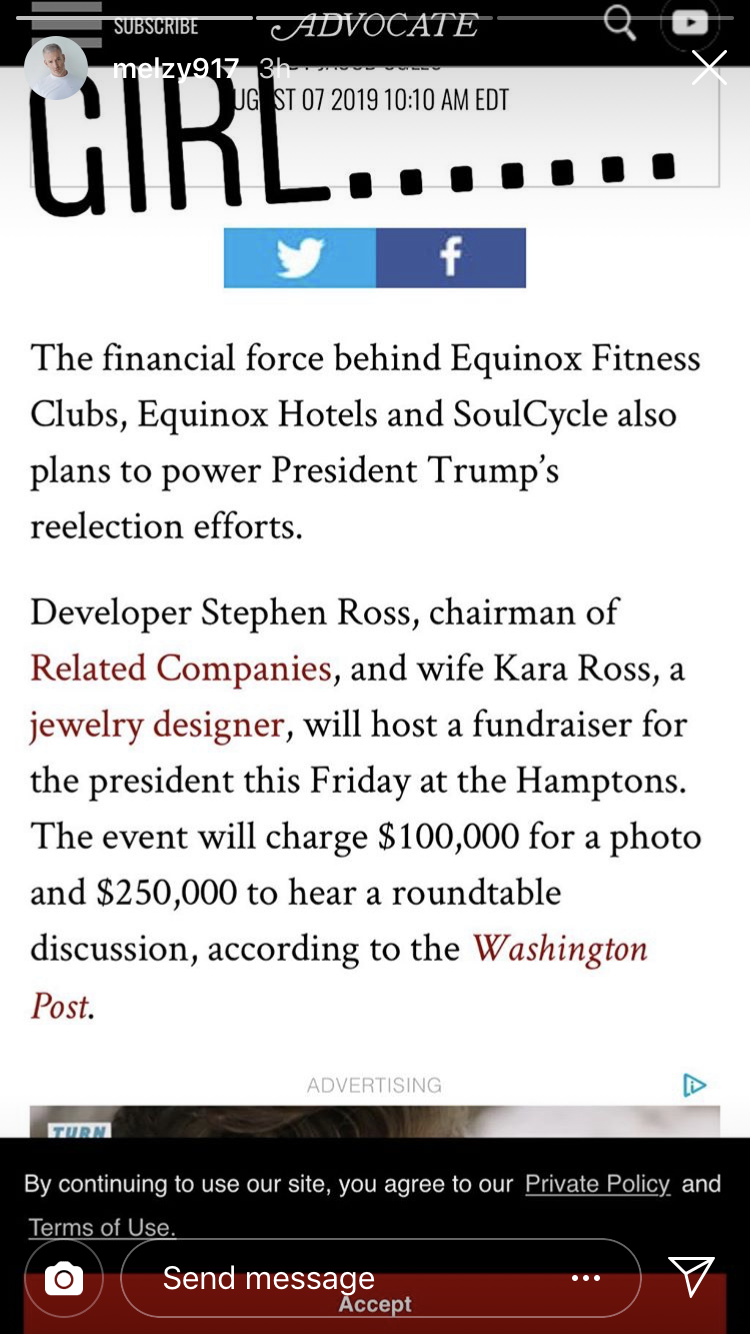 Hey @Equinox – what’s your policy for canceling memberships once a member finds out your owner is enabling racism and mass murder?

Stephen Ross is the majority owner of the parent company of Equinox gyms. He is holding a big Trump fundraiser. Know where your money is going. https://t.co/5t6Yxq8BCm

The Post article writes that Trump fundraising luncheon is at the home of NY real estate developer Stephen Ross & his wife, jewelry designer Kara Ross. Good catch by @shannoncoulter – Ross also owns Equinox and Soul Cycle. No Soul Cycle for me today. Or tomorrow. Or the next day https://t.co/B73j2VCZk0

The owner of Equinox & Soul Cycle is a major funder of the Trump campaign & is throwing a big fundraiser for him. You can express feelings to: memadmin@equinox.com. Remember where your $ is going. Money makes the world go round. What kind of world do you want to live in?

HHAHAHAHAH I’m so glad I quit @Equinox and as for @soulcycle I always knew a pay-to-play cult based around riding a bicycle to nowhere was fucking stupid AHAHAHHAHAHA QUIT IT ALLLL https://t.co/vC6n2xLZAM

A First Look at the Neiman Marcus at Hudson Yards

Will New York Fashion Shows End Up at the Shed?

WATCH: Blue Ivy’s Stylist Takes Us Inside His World