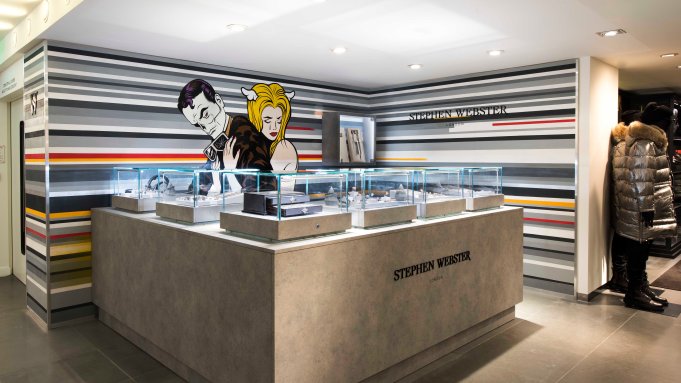 BLADE RUNNER: Stephen Webster has opened a jewelry pop-up in the contemporary men’s department downstairs at Harrods, and in addition to carrying sparkling cuff links and pendants, it showcases his new collection of carving knives, their ornate, bronze handles made in the shapes of animal heads.

The shop is located in the Advanced International area on the lower ground floor, and showcases small gold and diamond switchblades, Russian Orthodox crosses and Egyptian key of life pendants, gem-set cuff links, signet rings, bracelets and even gold or enameled vaping accessories.

The wall behind the counter has a colorful, Gothic, comic-book-style mural by London street artist D*Face, one of Webster’s friends, while a selection of the high-end kitchen knives hangs in a transparent case nearby.

Webster said he’s been working on the knives, which are made in south London with Damascus steel blades, for the past year. The handles, in the shape of rooster, bull, ram or boar’s heads, are made in a similar manner to his jewelry.

“Men love carving things – each other, and bits of meat,” said Webster, adding that it’s the first time all of his men’s jewelry has been on display in one place.

Webster said it annoyed him that, while men have no problem buying and wearing jewelry for themselves, “they are still expected to carry out their jewelry shopping in what are essentially women’s boutiques. Now I’ve got the chance to really let rip after so many years playing in a woman’s world,” he said.

Harrods’ chief merchant Helen David said she and Webster had been talking about doing a stand-alone men’s jewelry space for a while. “Stephen is very welcome in our men’s department,” said David.