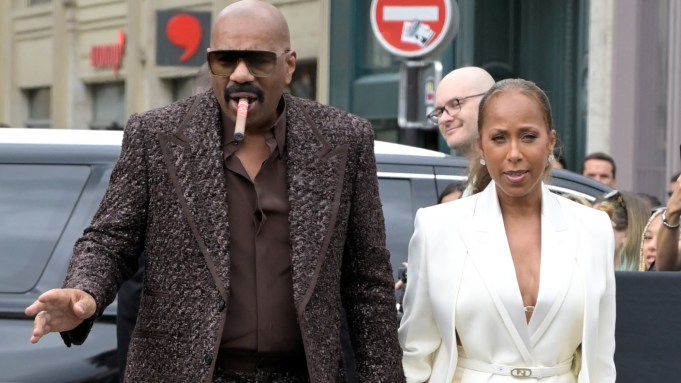 Steve and Marjorie Harvey made a stylish entrance while attending the Fendi show during Paris Couture Week.

On Thursday, the couple walked hand-in-hand in chic ensembles for Kim Jones’ latest haute couture show in Paris. Steve Harvey wore a custom look by Alta Sartoria, which was a brown tweed suit jacket lined with silk trim with matching trousers and a brown button-down underneath. He wore brown patent shoes and sunglasses, both by Saint Laurent.

His wife, Marjorie Harvey, wore a crisp white suit featuring a plunging neckline by the Italian luxury fashion house paired with white boots and a white clutch. She wore her hair in a ponytail and diamond stud earrings.

While walking into the show, the famous comedian and television host was smoking a cigar as they waved to spectators on the street and posed for pictures.

In the last year, Steve Harvey has emerged as a surprise style star. With the help of his stylist Elly Karamoh, the TV personality went viral in the last few months for his more bold outfits.

Steve Harvey has been photographed in Givenchy, Louis Vuitton, Balenciaga, Tom Ford and Berluti, among many others, for street style, appearances on shows and editorial shoots.