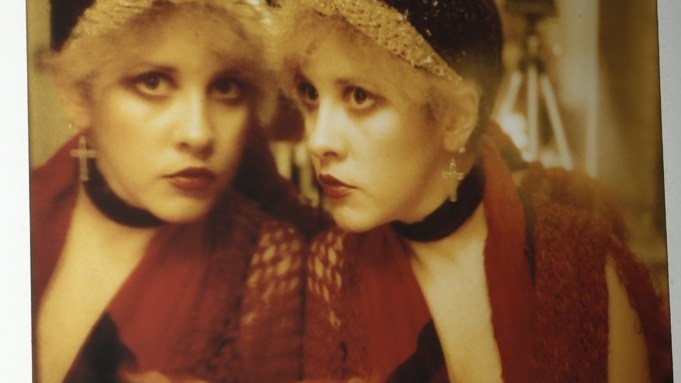 SELF-SERVICE STEVIE: “I couldn’t continue to wear leotards with nothing under them or skirts that you could see right through them like I could in 1976.” That was the self-reality check Seventies songstress Stevie Nicks gave herself while explaining some of the finer points of age appropriate dressing.

The singer has been making the rounds this week to promote her new album release, jamming at Madison Square Garden in a Fleetwood Mac reunion tour, hitting up the Today show for a Plaza performance and turning up at the Morrison Hotel gallery to show another body of work, her artwork, in an exhibit called the “24 Karat Gold Collection.” It features digitally reprinted Polaroids that Nicks had tucked away in a shoe box for years, and is a slightly tweaked name of her new album “24 Karat Gold – Songs from The Vault.”

Nicks dispelled any wild imaginations about what really went on in the heyday of Fleetwood Mac and her successful solo career that followed. According to a passage on the wall, Stevie spent her insomnia filled nights playing photo shoot with a Polaroid camera. “I was the stylist, the make-up artist, the furniture mover, the lighting director. It was my joy, I was the model,” she explains. And apparently, the photographer too as they were self-portraits taken by using a tethered cord to the camera, a Seventies version of the selfie.

The photos recently surfaced while searching for the new album of never released songs’ cover art with collaborator Dave Stewart, formerly of the Eurythmics. Stewart, who also dabbles in photography, felt they had stumbled across another sort gold, a treasure trove of classic Stevie style virtually unseen by the public eye. According to gallery owner Peter Blachley they called upon Graham Nash who followed up his rock career by becoming a fine art photographer via the digital era to convert them to prints. The photos of Nicks shown predominantly with her permed blonde locks and pouty red lips display her penchant for head scarfs, vintage hats and chokers will surely be gold for next seasons designer mood boards as well.

The big designers however, have rarely influenced Nicks who has been using the same designer, Margi Kent, since 1976 and in the last 10 years Liliana Casabal of Morgane Le Fay. Le Fay does her dresses and Kent the signature fitted jackets.  Despite her influence over fashion, last night’s crowd was just peppered here and there with nods to Nicks; a flocked velvet dress here, a batwing cape there and a flowing chiffon hemline were spotted. Designer Loree Rodkin, who has long ties to the world of rock ‘n’ roll, was in attendance to support her friend and pronounced “If it weren’t for Cher (another personal friend) and Stevie, there would be no clothes today”.