Osaka's dilapidated buildings are home to a flock of experimental vintage boutiques that approach visual merchandising as a hobbyist pursuit. 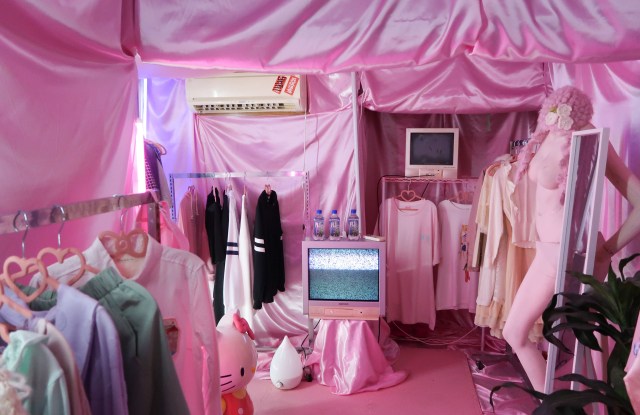 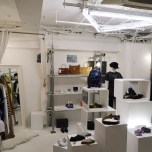 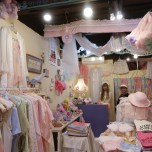 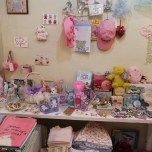 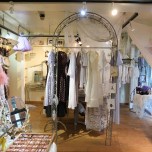 OSAKA, Japan — Hidden within trashed buildings and rattling underneath raised subway tracks here are tiny experimental shops that emphasize creative merchandising over commerce. They are swathed in pink satin, or use suspended tree branches as clothing racks and sell a random mix of vintage, new and retooled thrift items — turning humble scraps into cabinets of aesthetic commerce.

Osaka’s fashion scene is often overshadowed by Tokyo. The capital, though, is not the whimsical destination it once was — as fashionable neighborhoods experience escalating rents, more and more stores are being pushed into suburban districts.

Rents in key Tokyo shopping districts escalated as much as 25 percent in 2016, according to data pooled by Cushman & Wakefield. The firm estimates that rents in Tokyo’s prime areas are 60 percent higher than those in prime areas in Osaka.

The ceiling of the Kakavaka boutique, located on the third floor of a repurposed Shinsaibashi building.  Misty White Sidell/WWD

This city’s tourism pales in comparison to Tokyo’s mobs and thus the Japanese government has placed less emphasis on reviving infrastructure here. This has left large portions of Osaka chock-full of dilapidated, nearly crusted-over buildings with cheap rents — havens for hidden shops with eccentric premises. The focus for these boutiques isn’t on the bottom line but rather to create an experience and stir an emotion — providing a clubhouse of sorts for friends to spend money or wander around.

For Osaka-based creatives, a round-trip train to Tokyo — at about $300 — is prohibitively expensive, making the city’s arts community relatively independent and deeply collaborative. Osaka-jin, as city-dwellers are known, have a reputation for being brash, boisterous and freer in their expression. Tokyoites often stereotype the Osaka-jin style as laden in leopard print and glitter.

The experimental shops visited by WWD are located in proximity to city centers, primarily in the more rundown parts of Shinsaibashi and in a developing area called Nakazakicho, just north of Umeda.

In Shinsaibashi, concept shops are hidden on the upper floors of old walk-up buildings with yellowed Formica hallways and flickering fluorescent lights.

Rundown buildings in Shinsaibashi, such as the one above, host an eclectic array of vintage stores and mini bars.  WWD

One such store — called Psychic Shop — is the after-school hobby for a collective of teenaged art students.

The store — located in a dilapidated building filled with miniature theme bars (one is called Bipartisan) — is a two-story experiment in visual presentation and display. Its tidbits of vintage clothes play a secondary role to the store’s overall ambience.

Each of its two levels is the size of a walk-in closet. The boutique’s first floor is a cutesy acid trip, with pink neon lighting illuminating a floor of bleached gravel. Dangling anime plushies, string lights and vintage flip phones canopy the ceiling. The boutique’s top floor, accessible by a rickety metal stairwell, is blanketed in soft pink satin. A static television sits in the center, with Hello Kitty statuettes and Fiji water bottles liberally scattered around the clothes for contemporary contrast.

The entryway to Psychic Shop in Shinsaibashi.  Misty White Sidell/WWD

In Nakazakicho, select shops and vintage stores have found their way into spaces underneath the Tokaido Main Line railway — their ceiling fixtures rattling every few minutes as subway cars roar overhead. Such is the case for Elulu by JAM, a new all-women’s frilly retail concept by the Kansai region vintage chain JAM Trading Co., which has four locations across Osaka and Kyoto.

Just north of the railway lies the Sakura building, an abandoned office building that has been transformed into a central hub for vintage stores — with each of its boutiques the size of a small classroom. One such unit, Ghibellina, is run by fashion school professor Kyoka Tatsumi and his wife Harumi Tatsumi, a stylist. Another, Key, sells vintage concert T-shirts and American denim brands such as Lee and Levi’s — with tree branches and chain ropes decorating its ceiling.

In the surrounding area, shops such as Yamastore are interspersed among traditional Japanese homes, some dating back to the pre-war era. Yamastore’s facade has its name spelled out in plushie letters. The boutique sells an in-house brand as well as vintage pins and denim — sometimes displayed in retro commercial refrigerators.

These ideas are not to be replicated en masse with brand extensions and sister stores. For them, being niche is enough.