Stylebop and Next Throw Paris Bash

Anna Cleveland, Caroline Vreeland and Roland Mouret were among attendees at the dinner at Caviar Kaspia on Saturday night. 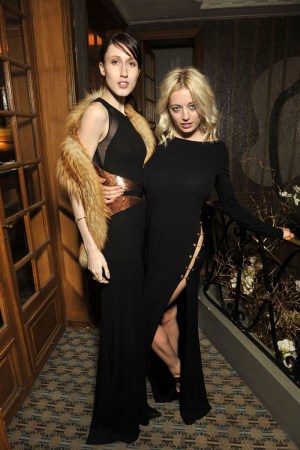 BRIGHT YOUNG THINGS: Fashion blue bloods — Anna Cleveland, Caroline Vreeland, Mahaut Mondino and Lily McMenamy — were among attendees at the dinner thrown by Stylebop and Next on Saturday night at Paris’ Caviar Kaspia.

“My mom always told me: ‘Go to Paris. You will meet a great group of people and get along with them,’” said Cleveland, who was wearing a chic black Ralph Rucci dress and Fendi fur.

Pat Cleveland’s daughter relocated to the French capital in September. “With my mother, I FaceTime every day, twice a day,” she said with a laugh.

Cleveland and Vreeland met for the first time at the dinner.

“We had a moment together where we could imagine our parent and great-grandparent knowing each other. It was cool!” said Vreeland, the 27-year-old great-granddaughter of Diana Vreeland who was wearing a sexy Pucci dress and a vintage Dior feather shrug that she inherited from her illustrious ancestor.

“I call it my bird; I am wrapped in it. It makes me feel safe. I also have her zebra rug, ivory bangles – there are five of them – and her silk pajamas that fit nobody else in the family,” she continued. “I am very lucky to have them.”

Vreeland, also a singer, is to perform after the Barbara Bui women’s ready-to-wear show in Paris in March.

Baba is on jury duty in the upcoming TV show “Project Fashion,” the French version of “Project Runway,” alongside Mouret.

“It was a great experience, but what I found interesting – maybe I am old-school – but when I asked the contestants what their inspiration was, a couple of them answered ‘nonchalance,’” continued Baba. “I wanted to slap them. To me, it’s the research, the curiosity and the execution that matter. You cannot have nonchalance without [substance].”

Chantal Thomass and Bui are among guest judges participating in the show, slated to air in early March during the Paris collections.

Meanwhile, Jeanne Damas will star in a French film. “It is a dark comedy about the relationship between a brother and a sister. I play the brother’s girlfriend,” said the French model, who added she is lined up to become a Gucci brand ambassador for France.

Ellen von Unwerth has been busy, too.

“I am going to shoot Die Antwoord playing on Wednesday at Le Zénith,” said the photographer, who will also snap Conchita Wurst for the poster of the Life Ball AIDS benefit in Vienna and has a new book published by Taschen that’s set for release this fall.

Over Caviar Kaspia’s smoked salmon and signature potatoes, Alexandre de Betak and Sofia Sanchez Barrenechea, who got married in Patagonia during the holidays, caught up with friends whom they hadn’t seen since their wedding. The couple evidently didn’t laze around during their honeymoon in Brazil.

After the dinner, Mahaut Mondino, Jean-Baptiste Mondino’s daughter, performed Whitney Houston’s “My Love Is Your Love,” among other songs.

“She certainly doesn’t need my advice,” commented her photographer dad.

“I love it. It reminds me of my teenage years,” said Vacacarello, who planned to attend the Atelier Versace couture show on Sunday night. He called his recent appointment as Versus’ creative director “the dream job for me.”

Cleveland was blown away by Mondino’s performance, saying: “She gave me chills. Wow! She went up and down and all around.”

Everyone was on their feet, dancing.