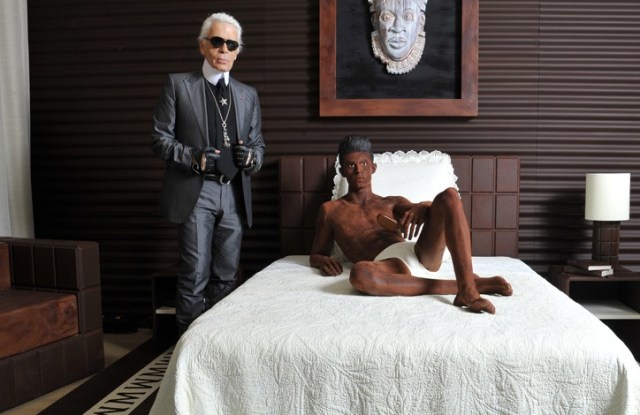 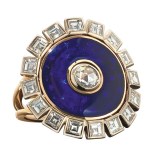 SUITE DREAMS: “I like to do things I’m not supposed to do,” Karl Lagerfeld said about his plans to join TV presenter Stéphane Bern on the national France 2 station this morning and give live commentary about the royal wedding in London. The multitasking designer was hosting a luncheon Thursday to unveil his latest design: a hotel suite at La Réserve constructed entirely of chocolate, complete with a life-size likeness of his sidekick, model Baptiste Giabiconi, lounging on a quilted white bedspread edged in delicate broderie anglaise. Master chocolate maker Patrick Roger employed 1.5 tons of something asparagus-thin Lagerfeld never eats to create the scented spectacle for ice cream brand Magnum, complete with a chocolate carpet and chocolate-book-filled chocolate nightstand.

Over a low-calorie lunch — with slivers of pineapple for dessert — journalists lobbed questions about why Lagerfeld takes on an ever-surprising array of projects. “I do what I can relate to and I haven’t done before,” he explained. “I like to do things quickly because I’m easily bored.” So is there anything left for him to do? “I can make a list of what I’ve done, but I cannot make a list of what I have yet to do,” was his retort.

SELFRIDGES’ ROYAL SALUTE: Selfridges has stacked its biggest window on Oxford Street in London with a host of royal look-alikes, whooping it up at a wedding banquet. Actors wearing masks to look like Kate Middleton, Prince William, Prince Harry, Prince Charles and wife Camilla and Queen Elizabeth are in the window Thursday and Friday drinking Champagne, eating strawberries and engaging with the public in the store and on the street. “It’s 360-degree entertainment,” said a spokesman for the store. “We wanted to do something purely theatrical.” On Friday, the pseudo-royals will frolic in the windows from 9:30 a.m. to 5:30 p.m.

SNAP TO IT: Not wanting to miss out on the now nearly round-the-clock coverage of the royal wedding, bridal designers have been busy making the media rounds. Amsale was handed a 72-hour turnaround time thanks to a “Today” show appearance, which called for four customized, royal-inspired gowns. The designer worked through the weekend to whip up dresses for four brides-to-be, including a 60-year-old who has never been married. Amsale will unveil her creations today on the NBC morning news show.

SOLANGE’S ROYAL JEWELS: Solange Azagury-Partridge will launch a collection of five noble rings today in an exclusive Aristocrats collection to mark the royal wedding festivities. Made of 18-carat guilloché, enameled gold and diamonds, the aptly named Empress, Duchess, Marquise, Princess and Countess rings — which Azagury-Partridge describes as “modern vintage” — will be available starting tomorrow at the designer’s New York and Los Angeles boutiques.

“I [wanted to] commemorate this moment in British history. There is only one royal wedding each generation,” the designer said. “The rings represent all the ranks of the aristocracy.”

Honorary celebrations will be held at both boutique locations — with Azagury-Partridge hosting the one in New York — where customers can try on the new collection while sipping high tea and viewing the Royal Wedding ceremony. Prices are available upon request and 10 percent of profits will be donated to Children’s Institute Inc. — Kristi Garced

SAVIORS FOR ALLSAINTS: Goode Partners and Lion Capital are this weekend set to put the finishing touches on a 100 million pound, or $166 million, deal to rescue the British retailer AllSaints. “We’re guardedly optimistic,” an AllSaints spokesman told WWD. A deal could be unveiled as early as Tuesday, according to an industry source.

A spokeswoman for Ernst & Young, the accountancy group that has been charged with finding a new investor for AllSaints, said Thursday that all the paperwork still had to be finalized and signed, and that an announcement would be likely next week. Officials at Goode and Lion didn’t return calls requesting comment.

Goode had been working for weeks to get an agreement off the ground, only to see its former partner in the deal, MSD Capital, Michael Dell’s private investment fund, pull out late last week. Lion Capital, whose investments include American Apparel and the lingerie retailer La Senza, replaced MSD last weekend.

According to sources, Goode already holds a stake in AllSaints, which it was seeking to protect with this latest deal. Goode is also an investor in Intermix.

AllSaints has been forced to restructure following the collapse of the Icelandic bank Kaupthing, which held a majority stake in the company through loans of a reported $532.2 million, which the company had used to fuel its rapid international expansion.

Ernst & Young put Kaupthing’s U.K. division into administration, the British equivalent of Chapter 11, and — separately — has been dealing with AllSaints, trying to find it new investors.

AllSaints also risked falling into administration had it not found an investor.