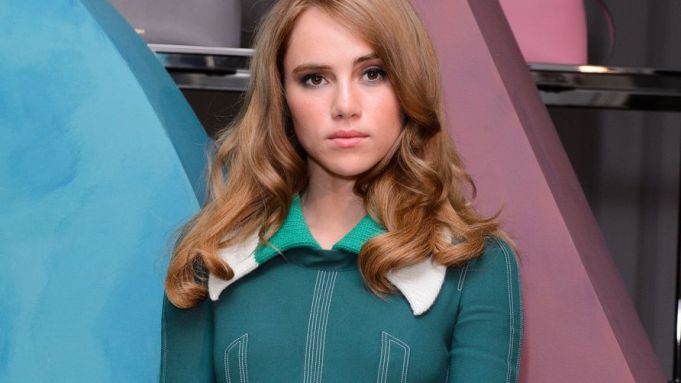 CREATIVE CRAFTSMANSHIP: Suki Waterhouse, Callum Turner and Josh Whitehouse were among the guests at a party hosted by Burberry at the brand’s Regent Street flagship on Friday night. Although Burberry won’t be showing its men’s wear until September during its first co-ed show, that didn’t stop the label from joining the twice-yearly men’s showcase.

The event put a spotlight on design and craft, and also highlighted the illustrations of Luke Edward Hall, whose whimsical cartoons were featured alongside images by Mario Testino in the brand’s latest ad campaign. “I was inspired by the jewel tones in the photography and the textures,” said Hall, describing his illustrations for the brand. “So it all came naturally from looking at the photography.”

Going forward, the London-based interior designer and artist said he plans to focus increasingly on pottery. “I’m about to do more ceramics. I started doing these hand-painted ceramics, which I’m selling.”

In keeping with the design theme, a row of craft and personalization stations were positioned on the second floor and guests were able to watch artisans hand-paint monogram initials onto bags. The event, hosted by Burberry’s chief creative and chief executive officer Christopher Bailey, kicked off a series of in-store bespoke experiences and services that will run for a month at the Regent Street flagship.

Waterhouse, who recently wrapped “Future World,” where she stars alongside James Franco and Milla Jovovich, will head to Brazil next month for the opening of the Olympics. While she admits she doesn’t watch a lot of sports, the actress recalled the buoyant mood in London when it hosted the Olympic Games four years ago. “I think the countries feel so happy (when they host the Olympics) and Brazil is the best, best fun ever. That — and Glastonbury.”

Turner, the model and actor who recently starred in the brand’s latest campaign alongside Edie Campbell, recalled an awkward moment during the shoot.

“Mario gave the direction, and I was supposed to do something. I turned to Edie and said: ‘What did he just do?’ and she was like ‘Oh it is a thing.’ And I was like ‘But what is it? What is that?'” Turner soon discovered it was Mario demonstrating how to walk slowly towards the camera. “I didn’t know how to do that,” he said.