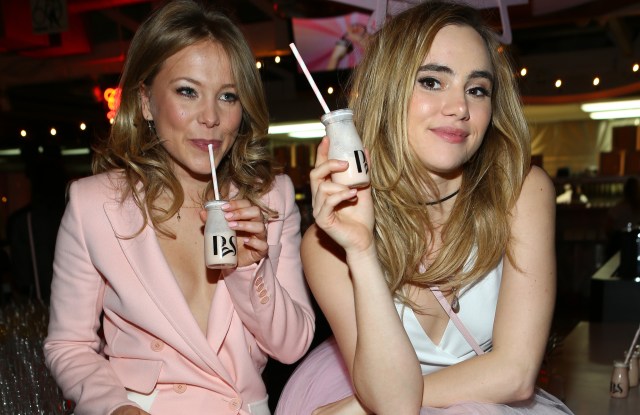 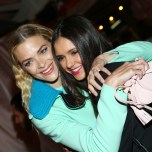 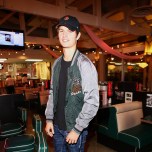 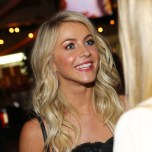 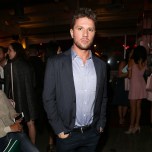 Theme nights may be a thing of the past, but model-actress Suki Waterhouse and her best friend, television host Poppy Jamie, did their best to revive the trend on Wednesday night at vintage chain Mel’s Drive-In to celebrate the launch of their jewelry and bag line, Pop & Suki.

“We had all these other ideas of where to go, like the Chateau [Marmont], but I was driving past here on a three-way phone chat and I was like, ‘Guys, there’s a giant Fifties diner. We have to do it here.’ We wanted it to be themed in a Pop & Suki world,” said Waterhouse, who was decked out in a vintage-style pink mesh and tulle skirt. “We also wanted a place where our friends can sit down, eat and chat.” As if to prove her point, she grabbed a giant sweet potato fry from a passing waitress and stuffed it into her mouth.

Jamie explained the pair’s decision to launch their online, direct-to-consumer brand with customizable handbags. “It was to create something minimal, feminine and useful, for the girl on the go who wants a bag from morning to night. We’re obsessed with vintage shopping, which is why we came up with this camera bag style,” she said of the small rectangular bag, which most guests had personalized with their names.

Paris Hilton was one who also came dressed to match her pastel pink Pop & Suki purse. “It’s fun and cute and girly. I also brought my own purse so I could fit more in it,” she said of her other pink bag, “but this one is great for when you are walking around a party.” The branding maven knows a thing or two about putting her name on merchandise (her 21st fragrance is due out soon), and she seemed to approve of the line. “I love the whole custom feel about it as well,” she said.

Meanwhile, guests like Julianne Hough — the “Grease Live” actress looked right at home at the soda fountain bar, sporting her bag that said “Jules” on the bottom — Nina Dobrev, Jaime King, Ansel Elgort, Ryan Phillippe, Chiara Ferragni and Seth MacFarlane enjoyed the atmosphere, cozying up in the vinyl booths and ordering mini milkshakes, burgers and fries. Friends Cara Delevingne and Georgia May Jagger were also in the mix, though they evaded photographers all night.

There was even a themed photo wall in the back adorned with pink balloons. “I’m slightly in the midst right now,” said Waterhouse, who was busy moving around props such as a sugar sprinkle-covered table. Not one to miss out on the moment, guest Ellen von Unwerth grabbed her camera and began snapping away.