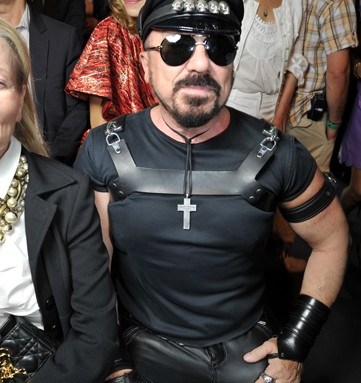 SUMMER WINE: As guests arrived at the Christian Dior couture show in the sun-drenched garden of the Musée Rodin, talk turned to summer plans. “I’m going to my house on Long Island and I will be picking cherries,” said Peter Marino, adding that he had just returned from two-week motorbike trip to the Grand Canyon. But it’s not all play for the architect and interior designer, who just won a competition to design a hotel on a whole city block in Beirut. He’s also working on several yacht projects. “For some reason, all the superrich are obsessed with yachts right now,” he said.

Marisa Berenson has so many projects on the boil, she won’t have time for a summer vacation this year. In addition to organizing a four-city exhibition around the fall release of her book, “Marisa Berenson: A Life in Pictures,” she was heading to the vineyard region around Bordeaux later in the week to shoot an episode of French TV crime thriller “The Blood of the Vine.” After that, she is off to New York for a photo shoot with Steven Meisel for Interview magazine. “I will put myself in his hands,” she laughed.

Vintage retailer Cameron Silver was dealing with a wardrobe malfunction of sorts after coming face to face with another guest wearing the same Day-Glo pink Jil Sander suit jacket — though he went for the matching pants, while the other guy opted for orange. “We took a picture together,” Silver said with a laugh.

GREAT EXPECTATIONS: Up-and-coming French actresses Mélanie Bernier and Caroline Tillette turned out for the Alexis Mabille couture show. Tillette revealed she is to play the ex-girlfriend of French heartthrob Romain Duris in “Populaire,” due to start shooting in the fall. Bernier, meanwhile, has just completed filming on “La délicatesse,” a romantic comedy based on the bestselling novel by David Foenkinos, in which she plays Audrey Tautou’s assistant. “I watch her every move and I’m the office tattletale,” she laughed.

FAYED BACK IN FASHION: Mohamed Al Fayed clearly can’t resist the siren call of designer clothing: After selling Harrods more than a year ago, he’s back in the fashion game with the purchase of Cocosa, the members-only flash sales Web site owned by Bauer Media. The e-tailer, which launched in 2008, blazed a trail in the U.K. for such businesses as Brandalley.com and Vente-Privée.com. It has 500,000 members and holds 50 sales a month of brands including Alexander McQueen, Alice Temperley, DKNY, and Halston Heritage. The terms of the deal were not disclosed.

Al Fayed sold Harrods in May 2010 for $2.2 billion to Qatar Holding LLC. He retains the title of honorary chairman of the Knightsbridge store.

SOCIAL AGENDA: Socialites including Eugenie Niarchos, Tatiana Santo Domingo, Daphne Guinness, Margherita Missoni and Vanessa Traina turned out for the couture debut of Giambattista Valli, held in the historic passageway that is home to his Paris store.

Lee Radziwill, who is featured in several upcoming coffee table books about the 20th century jet set, chatted with her neighbor, Bianca Brandolini d’Adda. “She is the most elegant woman I have ever known,” Brandolini d’Adda raved. “Even when she has an amazing dress on, she looks as comfortable as if she were wearing pyjamas.” But Radziwill was shy about dispensing style tips to the younger set. “They know better than I do what suits them,” she purred.

Style maven Olivia Palermo will soon be doling out her tips to the masses when her blog launches midsummer. Elisa Sednaoui was taking an evening off from shooting first-time director Frédéric Beigbeder’s film adaptation of his novel, “Love Lasts Three Years.” Having already donned a wedding dress for one scene, she was preparing to strap on a fake pregnancy belly. “I was like, ‘Are you sure? Isn’t this too big?’ But they said, ‘This is only six months, darling. Get used to it,’” she said. The model-turned-actress spent May in Italy filming “The Legend of Kaspar Hauser” opposite Vincent Gallo and is also co-directing a documentary about women in Egypt, where she was raised. “I’m really looking forward to that, three weeks of me being in control!” she laughed.

And if the socials are wondering where to wear Valli’s extravagantly embellished creations, Andrea Dellal had the answer: she will be chairing the Brazil Foundation gala at the New York Public Library on Sept. 19.

STREET WEAR: Dresses this expensive aren’t normally seen strolling down the Rue Saint Martin. But after the finale of his couture show on Wednesday, Jean Paul Gaultier plans to accompany his models out into the street and walk over to nearby music hall, the Gaîté Lyrique, for the launch of a new Gaultier men’s fragrance. And don’t be surprised if the streets are clogged with rabid Mylène Farmer fans. The pop queen — the Madonna of France — is expected to be in the show.

FIT TO PRINT: The war of words among two of Italy’s most prominent figures continued over the weekend, this time black on white. In response to recent accusations by Tod’s Group’s chief, Diego della Valle, Giorgio Armani wrote a three-quarter page missive to Corriere della Sera, Italy’s top newspaper, to elucidate the benefits of not going public and remaining independent: Because he would never compromise the creativity and freedom of his fashion conglomerate. “I don’t need alliances, complicity, or need to surround myself with international jetsetters,” he wrote. “I have too much respect for myself, for the public, and for the people that work both with me and the fashion industry to renounce any sort of intellectual honesty that influences and orients my life, even at the expense of attractive economic opportunities….I don’t need any of the money from the stock exchange — not for growth, not for globalization, not to aggregate my brand.” The bickering began a couple weeks ago when Armani, after his spring-summer 2012 men’s wear show in Milan, criticized fashion houses such as Prada and Dolce & Gabbana for creating ridiculous fashions, dictated by the fact that fashion today is in the hands of the banks and of the stock market and not of their owners. His comments didn’t go unnoticed by Della Valle who lashed back, blessing IPOs and suggesting Armani should invest in Italy’s crumbling cultural landmarks.