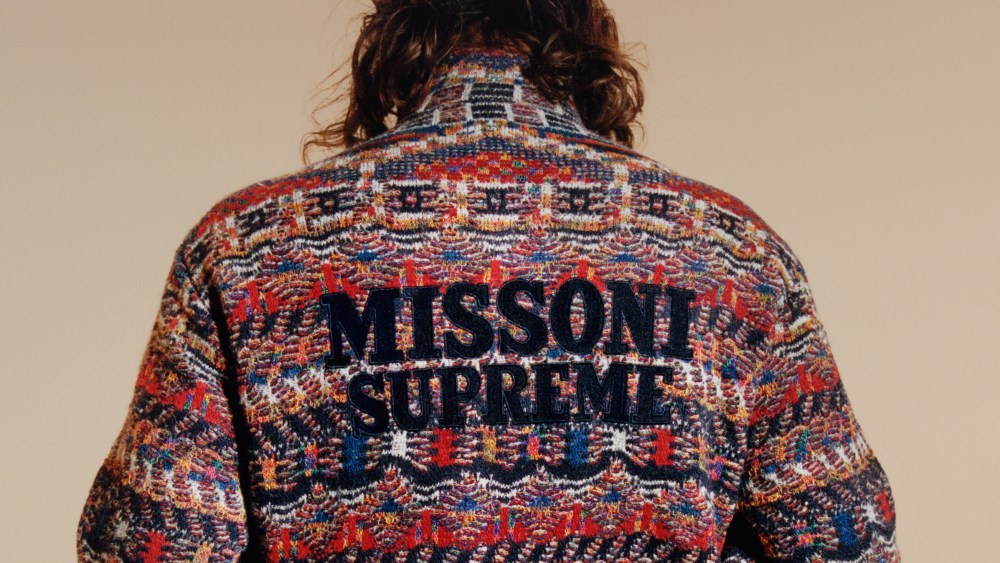 SUPREME KNITS: One can’t get through the line outside a Tiffany & Co. store and yet Supreme is already onto the next collaboration.

After teaming up with the jewelry brand last week, the skate brand is to release a collection developed with Missoni, moving from Tiffany’s signature robin’s egg blue shade to a more extensive palette of colors.

The Supreme/Missoni collection is to include bomber jackets, hooded sweatshirts and bucket hats bearing the name of both brands, as well as colorful knits — Missoni’s signature — that make for the highlight of the lineup. The range will drop on Nov. 18, except in Japan, where products will hit the market on Nov. 20.

While the jewelry initiative by the streetwear brand was a surprising move, the tie-up with Missoni is in sync with the DNA and history of the Italian luxury label.

The company’s founder Ottavio Missoni, who died in 2013 at age 92, was an athlete, competing in the 1948 London Olympics.

He began dabbling in fashion a year before the event, when along with his friend and teammate Giorgio Oberweger, he produced wool tracksuits to be worn by the Italian Olympic team. During the Games, Missoni also first met his lifelong partner Rosita Jelmini, who hailed from a family that specialized in shawls and embroidery.

After marrying in 1953, the young couple set up a small knitwear workshop they called Maglificio Jolly. Their knowledge of knitwear construction and machinery helped them develop the innovative approach to lightweight knits that would become Missoni’s signature along with the heightened color sensibility that has been informing every item of the brand ever since. Over the years, the company scaled its size and expanded to encompass evening wear, swimwear, accessories, fragrances and furniture.

Missoni’s tie-up with Supreme further marks a key year for the brand, since the founder would have turned 100 in 2021. As reported, an art exhibition at the MA*GA museum in Gallarate, Italy, and two documentaries — “Ottavio Missoni 100” and “Being Missoni” broadcast on Sky Sport and Sky Arte, respectively — were among the initiatives celebrating the anniversary earlier this year.

Supreme has frequently teamed up with labels from activewear or outdoors categories such as Nike, The North Face, Vans, Champion, Timberland, Lacoste, Levi’s and Stone Island. In 2017, the collaboration with Louis Vuitton catapulted the skate brand into the luxury sphere, where it consolidated its presence with additional collaborations with names such as Rimowa, Jean Paul Gaultier, Yohji Yamamoto, Junya Watanabe and Emilio Pucci.