A Louis Vuitton x Supreme Monogram Trunk and Hermès crocodile Birkin sold for $125,000 each in an online auction that totaled over $2 million.

A look from the Supreme x Louis Vuitton collection.

Christie’s brought in more than $2.1 million in its Handbags x Hype online auction, thanks in part to an Hermès matte white Himalaya Niloticus Crocodile Birkin 30 and a Louis Vuitton x Supreme Monogram Malle Courrier 90 Trunk, which both doubled their low estimates and sold at $125,000 each.

While an overall total of 89 percent of the pieces were sold during the auction, Supreme merchandise exceeded that number, selling 95 percent of its pieces including an Everlast Boxing Group that sold for $17,500, Stern Pinball Machine for $32,500 and a set of two signed Kaws Chum Skateboards also for $32,500, which was also four times its low estimate. Also, a set of five Damien Hirst Dots Skateboards sold for $15,000 and a Louis Vuitton x Supreme red Classic Monogram Skateboard sold for $30,000.

Additional notable sales include a Hermès multicolor One Two Three & Away We Go Birkin by Nigel Peake that sold for three times its estimate at $47,500, a limited-edition black calfbox leather So Black Birkin 35 for $37,500, and a custom matte Mimosa and Gris Perle Alligator Birkin 30 for $50,000. 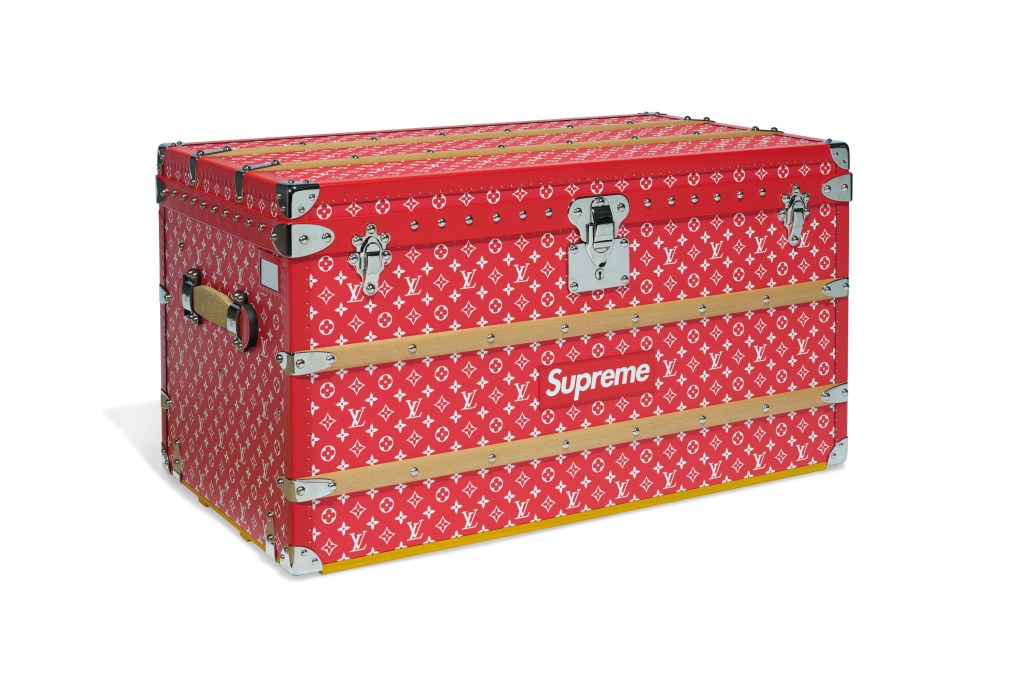 “The strong sale results demonstrate Christie’s ability to meet our clients’ ever-changing needs and rise to new market demands,” said Caitlin Donovan, head of sale for handbags and accessories at Christie’s. “This auction successfully captured luxury as it is defined today and we were delighted to see the wide range of global participation with bidders from the U.S., Asia, Europe, and the Middle East.”

Many Supreme skate decks are available and on view at Otis, the new investment app that sells shares of art pieces, sneakers, handbags and other collectibles. The app also offers an Hermès Birkin bag.

This summer, Sotheby’s held a similar auction with Stadium Goods to sell 100 rare sneakers, which were acquired privately by entrepreneur and collector Miles Nadal. The Nike Moon Shoes from the 1972 Olympic Trials sold for $437,000, which set a Guinness Book World Record for the most expensive shoes sold in the world.