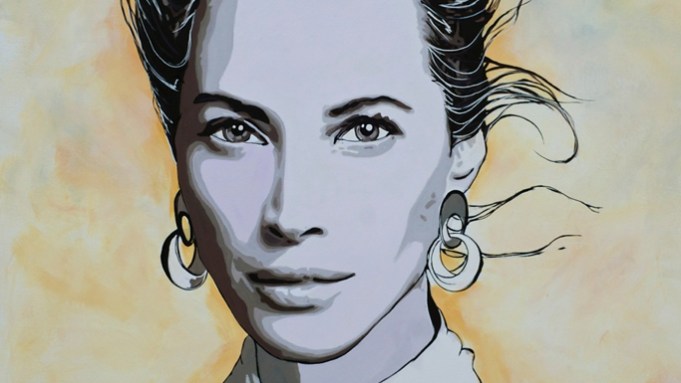 “We wanted celebrities that were well-known, but not just pretty faces,” said Mark Boomershine, the Atlanta-based pop artist whose exhibition, “Revealed: Faces of Our Time,” opens May 14 at The Surrey hotel on Manhattan’s Upper East Side in collaboration with Voltz Clarke and ArtMuse — just in time for the Frieze Art Fair New York. “We wanted celebrities with depth.” The portraits — of Cara Delevingne, the face of the exhibition, as well as Emma Roberts, Sting, Christy Turlington, Taylor Swift, Derek Jeter, Padma Lakshmi, Daniel Boulud and Eddie Redmayne — will appear scattered throughout the hotel’s lobby and presidential suite. Boomershine works from photographs he finds, but most of the subjects’ poses are derived from his imagination. “I’m a figurative painter, but I like to have as much photo realism in the works with as few brush strokes and colors as possible,” he said of his mostly monochromatic paintings, which will be on display in the hotel through June 5. During a preview of the exhibit, Blair Clarke, the artist’s personal dealer put the selection process in perspective. “Everything is so political now. It’s OK to have optimistic work,” she said. “These 10 subjects — I can’t tell you how much thought went into who we were picking.” The paintings are priced from $8,000 to $15,000.