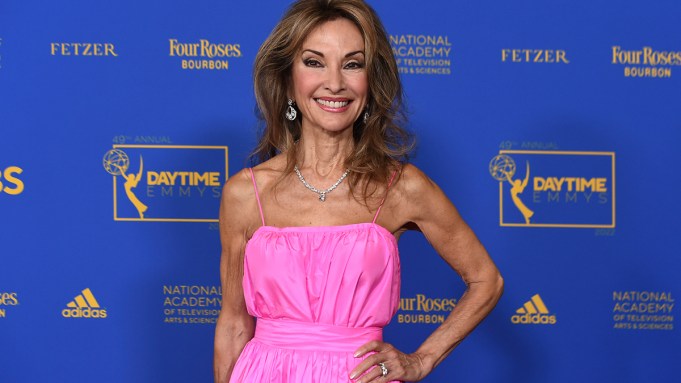 Susan Lucci is daytime TV royalty, a reliable staple of the soap opera genre for decades. Predictably, the 75-year-old actress has attended numerous Daytime Emmy Awards over the years. For the 2022 Daytime Emmy Awards in Los Angeles on Friday, the “All My Children” star chose a statement hot pink gown.

The famed actress arrived on the red carpet in a floor-length bright pink tiered maxi dress in silk taffeta from Adam Lippes’ Spring 2022 collection. The silhouette featured thin straps and a straight neckline with a slightly billowed top and a three-tiered skirt with a coordinating waist-defining tie to add structure.

Lucci wore her hair in her signature blown-out style, wearing a blush-glam makeup look with pink lipstick matching her chosen gown. The award-winning actress accessorized with a diamond necklace and silver filigree earrings.

The Daytime Emmy Award is an annual award show celebrating the best of American daytime television. The award show also includes the Daytime Creative Arts Emmy Awards under its umbrella, which are a class of Emmy Awards presented for daytime television production and technical achievement. Leading the television nominations are “The Young and the Restless” with 18 nods, followed closely by “General Hospital” with 17 nods. “The Kelly Clarkson Show” and “The View” each have nine nods, the highest award count of any talk shows. The Daytime Emmys air on Friday, June 24.