By Misty White Sidell on May 3, 2016
View Slideshow 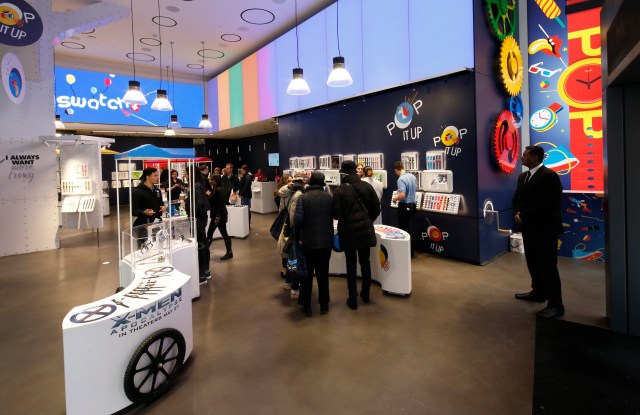 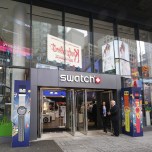 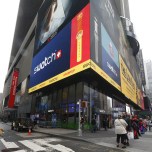 NEW YORK — The Swatch Group marked the opening of its new Times Square flagship for the Americas on Tuesday night.

The unit, measuring 4,300 square feet, is intended to provide shoppers with an interactive experience.

Located at 1535 Broadway, the multilevel store is in the former breezeway of the Marriott Marquee hotel. It is markedly larger than the Swiss firm’s former Times Square flagship at 1528 Broadway, which measured 3,125 square feet.

Creative director Carlo Giordanetti told WWD of Swatch’s New York upgrade: “Certainly one of our major objectives is to make the space much lighter, brighter, more open and transparent — for Swatch the notion of transparency is a very important part of our DNA.

“We love interaction — especially a location like Times Square — you need to engage people much more than just with product,” he added of the store’s entertainment factor.

The store is retrofitted with an interactive color wall that morphs when shoppers spin a “watch gear” fixture. Interactive digitalized viewfinders provide a virtual sightseeing tour of the city. Many of the watch display cases were built to mimic New York iconography, including hot dog stands. The company’s interchangeable “Pop” collection will be a focal point of merchandise stocked.

Construction of the store began six months ago, and the unit had a soft opening in mid-March. The design aspects of the store are unique to the location.

Giordanetti said that with the new fixtures and space, the brand could see its Times Square sales easily increasing by 15 to 18 percent. He declined to provide exact sales volumes.

Swatch Group is the world’s largest watch company and has been battling headwinds over the last year as a result of the strong Swiss franc. The group’s net revenues fell last year by 3 percent to 8.45 billion Swiss francs, or $8.51 billion, while net income slumped 21 percent to 1.12 billion Swiss francs, or $1.13 billion. That prompted broker downgrades on fears that profit margins were being sacrificed to preserve market share.

To help jump-start growth, the group has been expanding its own-store network. Revenues from its own stores now account for about 30 percent of group sales, double the level of five years ago, sources said.