The Swiss company is taking part in the international contemporary art exhibition with two main projects.

By Alessandra Turra on May 30, 2013
View Slideshow 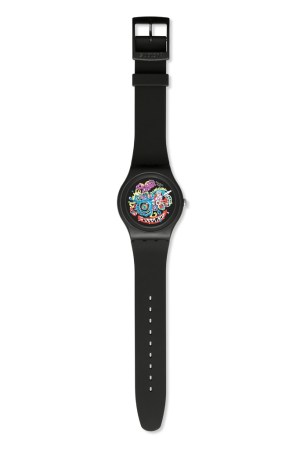 NEW TIME: Swatch is celebrating its 30th anniversary launching the “Swatch Faces” project at the 55th edition of the Venice Biennale.

The Swiss company is taking part in the international contemporary art exhibition with two main projects. The first consists of an installation located at Venice Biennale’s Giardini area showing the faces and the art works of the 16 artists who last year lived in the Swatch Art Peace Hotel, a resort in Shanghai’s Bund renovated by the label to host artists from all around the world.

“The installation is inspired by the hotel,” said Swatch chief executive officer Nick Hayek Jr. “It’s an ideal bridge between Venice and Shanghai.”

Among the artists presented at the Giardini is Josè Carlos Casado, who also designed “Off,” a limited edition watch, sold with a unique watercolor signed by the Spanish artist. “Off” is part of Swatch’s Art Special range, which also includes two other styles, “Blue Wild Face” and “Wild Face,” conceived by New York-based Japanese artist duo Goto Design.

In addition, at Biennale’s Arsenale area, Swatch has realized an art wall featuring the pictures of 30 people born in 1983, when the company was founded. Among them is British singer Mika.”I grew up at the same time as Swatch was growing up and I started to read time with a Flik Flak watch [Flik Flak is Swatch Group’s watch brand for children and kids]. So I developed this kind of obsession from the age of five even if I can’t read the time easily because I’m dyslexic,” Mika said, adding that “Swatch is creative, anti-snob, that for me is very important.”

To involve customers and collectors in the Swatch Faces project, the company has developed a smartphone application, associating each portrait uploaded on the app with a specific watch from the company’s archives.