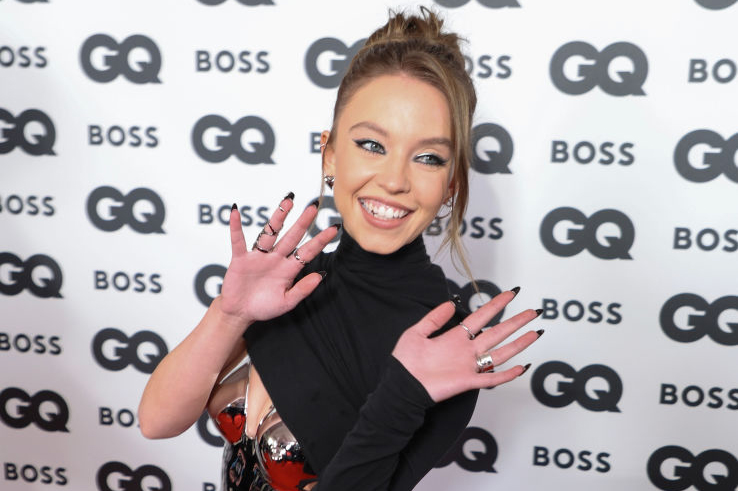 Sydney Sweeney made a striking arrival on the red carpet for the GQ Men of the Year Awards in London on Wednesday, wearing an armored bodice.

To celebrate this year’s ceremony, Sweeney wore a black dress with an asymmetric long sleeve, a turtleneck neckline, a black train and a silver armored breastplate over a cutout around the bodice. LaQuan Smith custom-designed the dress for Sweeney.

She accessorized the look with rings and silver hoop earrings.

Although the dress was bespoke, a version of it was originally featured on the runway at LaQuan Smith’s spring 2023 collection show during New York Fashion Week. The collection was described as an ode to the body liberation movement.

Sweeney worked with stylist Molly Goddard to create her look for the event. Goddard has also worked with Katherine Langford, Karen Fairchild and Mindy Kaling.

Sweeney worked with Melissa Hernandez to create a statement eye makeup look, including wingtip eyeliner, silver eye shadow and heavy mascara. Sweeney also sported a nude lip. For hair, Sweeney tapped Glen Coco Oropeza, who gave her a high pin-up bun with a single strand that cascaded down her face.

Sweeney was among the list of honorees, recognized for her work in HBO’s “Euphoria.” This year, the actress received an Emmy nomination for Outstanding Supporting Actress in a Drama Series for her role on the show.

The GQ Men of the Year Awards is an annual celebration honoring people who have had cultural high points for the year and made a notable impact on the zeitgeist. This year’s awards were hosted by Boss. Honorees included Stormzy, Lee Jung-jae, Zoë Kravitz, Sir Mo Farrah, Ashley Walters and Joseph Quinn.