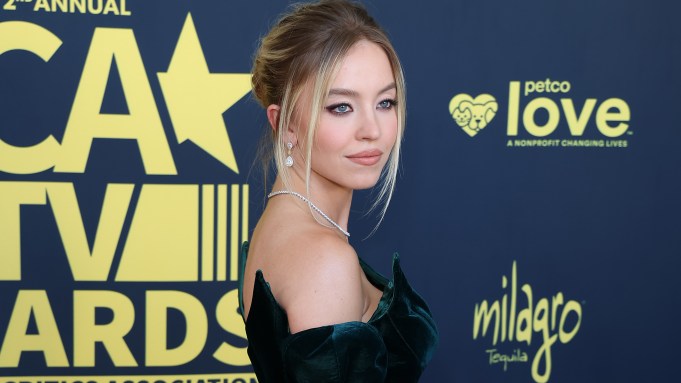 For the annual ceremony’s second year, Sweeney wore a mini vintage velour Mugler dress that featured a plunging neckline, puffed sleeves and peplum skirt, which was topped with a matching statement waist belt. She wore shoes by Jimmy Choo and jewelry from De Beers. She styled her hair in an updo with two strands of hair framing her face.

She was styled by Molly Dickson, who also works with the likes of Camila Mendes, Kelsea Ballerini and Sadie Sink.

According to Dickson’s Instagram, Sweeney was looking to wear a vintage piece for the event. After much research, they stumbled upon the Mugler dress from 1981, which was sourced from New York Vintage.

Sweeney was nominated for her role as Olivia Mossbacher in the HBO hit show “The White Lotus.” Joining her for the night were her costar Connie Britton, who plays her mother Nicole Mossbacher in the series and who was also nominated, and one of the show’s producers, David Bernad.

“The White Lotus” ended up taking home the award for Best Broadcast Network or Cable Limited or Anthology Series. After the ceremony, Sweeney, Britton and Bernad posed for pictures in the pressroom.

The actress was also nominated for her role as Cassie Howard in the second season of HBO’s “Euphoria.” She received nods for her roles in both “Euphoria” and “The White Lotus” for the upcoming Emmy Awards in September.