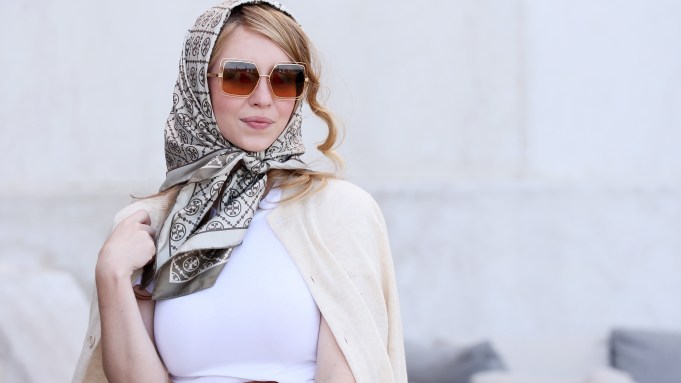 Sydney Sweeney has touched down at the Venice Film Festival.

On Thursday, the actress arrived at the Lido di Venezia via water taxi, channeling a ‘60s Hollywood star with her street style as the boat docked. Sweeney wore a white T-shirt paired with white shorts by Reformation and a large brown waist belt under a cream cardigan draped on her shoulders.

She topped the look off with accessories from Tory Burch, including brown Georgia slingback heels, square sunglasses, a monogrammed silk scarf and the Ella Tall Tote bag.

Sweeney arrived with her stylist Molly Dickson, who has styled her for events such as red carpets, premieres and high-scale events in the past, including the Met Gala, the Vanity Fair Oscars Party and more.

The “Euphoria” actress has worked closely with Tory Burch in the last year, even being named the brand’s official ambassador in April, representing its handbags and shoes.

“I’m so excited to partner with Tory Burch as her brand ambassador,” Sweeney said in a statement. “I’ve been a fan of her clothing and accessories for years, and I admire her tireless work to support women. I’m inspired not only by Tory’s vision and the business she has built, but also by her kindness and philanthropy. I am so looking forward to the beautiful partnership and meaningful conversations to come.”

In May, Sweeney made her Met Gala debut walking with Tory Burch on the carpet and wearing a custom-designed white strapless gown by the designer. The following month, she appeared in Tory Burch’s digital advertising campaign for the iconic Miller sandals, wearing the brand’s iconic, cult-favorite shoe style.