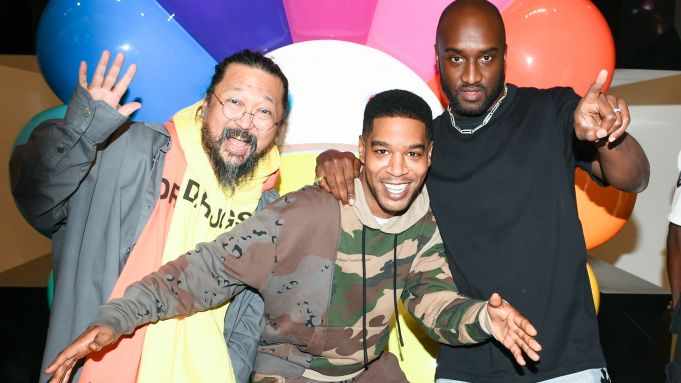 The line was half a block long, not an unusual occurrence at Gagosian Beverly Hills, but certainly one that hasn’t happened since its Oscar week opening featuring Damien Hirst in February. Wednesday night’s opening of “America Too,” the third collaboration between Takashi Murakami and Virgil Abloh, drew a small army of fans, most of them young and several of them famous.

Travis Scott, Kourtney Kardashian, Usher, Kid Cudi, Orlando Bloom and Luka Sabbat were spotted in the crowd, which was sizable inside, though nothing compared with the orderly throng outside. They were let in a handful at a time, making it possible for as many fans to take in the event as possible.

Many of the artworks themselves, in a variety of media, were also oversize, including the giant “Material Too,” a take on the American flag, that hung in the center of the North Gallery. It was probably also the biggest number of iPhones seen at an art opening, as young fans excitedly Instagrammed themselves in front of the colorful works, including Murakami’s iconic rainbow flower, onto which the signature arrows of Abloh’s Off-White label were overlaid, or “Arrows and Flower Neon Sign” and a rotating piece that blinked like a carnival ride.

While both men were too surrounded by handlers to conduct interviews, Murakami, who took a time out in an upstairs office, smiled and shook hands with well-wishers before a member of his team ushered them out.

Downstairs, Abloh had a comet-tail-like posse trailing and recording his every move, even as he tried to shake hands and pose for official photos with the celebrities.

In statements from the notes on the show, which runs through Oct. 25, Murakami said, “There is a zone of supremacy in the art world and there is a sense that fine art is the most precious and has the highest status. My collaboration with Virgil is trying to create something that is completely outside of that framework.” Abloh added, “Satire and irony are looming themes that are part of our now. Our dialogue is not so much embedded in the art; it’s embedded in the atmosphere that we’re creating.”