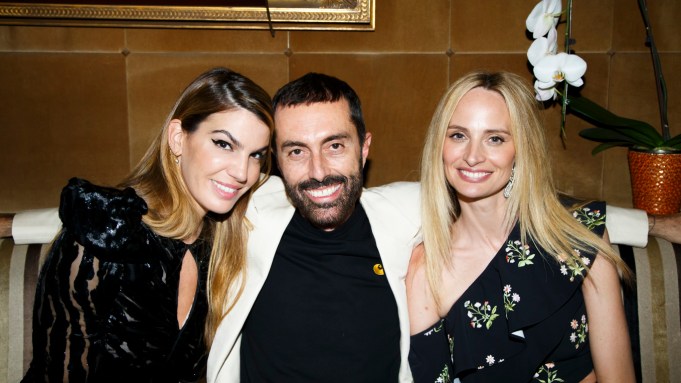 ROUND ABOUT: Diana Widmaier Picasso recently donned what is surely the strangest dress she’s ever worn.

“It’s a mixture of penises, breasts and pregnant woman,” she said of the bulbous latex garment made in 1968 by artist Louise Bourgeois, currently on display at Hauser & Wirth in Zurich for the exhibition “Louise Bourgeois & Pablo Picasso: Anatomies of Desire.” (Widmaier Picasso also models it on her Instagram account.)

The art historian wrote an essay “on the theme of pregnant women” for the exhibition catalogue, one of the many projects she described at Caviar Kaspia on Monday, where Bianca Brandolini d’Adda and Lauren Santo Domingo hosted a dinner for Giambattista Valli during Paris Couture Week.

New York-based singer Mafalda, who just released an EP titled “Daisy Chain,” said she would tour in support of the release in November, starting with Italy. But first a new video for the second single, “Hate Me Right.”

Rachel Zoe’s conversation with Nicky Hilton Rothschild was interrupted by a Facetime call by her children, now five and eight. Like many women at the party, including Mafalda and Caroline Vreeland, she had chosen a loose and flowing chiffon Valli number.

“He’s one of the few people [who] I’ll let style me,” Zoe said, while acknowledging she’s a pushover for “anything maxi, caftan, drapey — something I can move in.”

Eventually, guests settled into their seats, finding their names written on gold caviar tins. Alexia Niedzielski did her best to open hers, even prying with a knife to no avail. The caviar arrived later atop those famous potatoes.