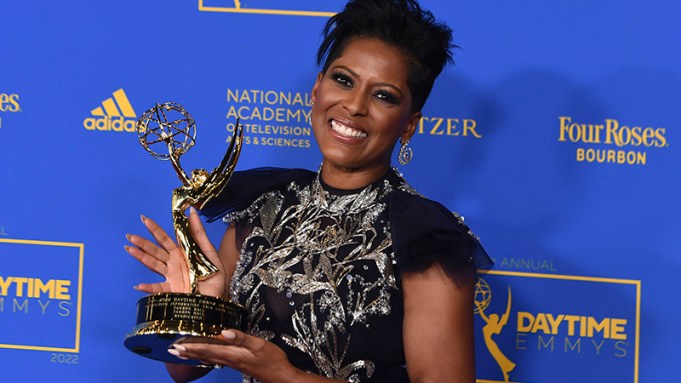 Hall wore her cropped hair in a voluminous updo, which showed off a pair of swirled diamond statement earrings. She echoed the dark glamour of her dress with a smoky eye look and a glossy nude lip.

During the award show, Hall won a Daytime Emmy for Outstanding Informative Talk Show Host for her work on “The Tamron Hall Show.”

The Daytime Emmy Award is an annual award show celebrating the best of American daytime television. The award show also includes the Daytime Creative Arts Emmy Awards under its umbrella, which are a class of Emmy Awards presented for daytime television production and technical achievement. Leading the television nominations are “The Young and the Restless” with 18 nods, followed closely by “General Hospital” with 17 nods. “The Kelly Clarkson Show” and “The View” each have nine nods, the highest of any talk shows nominated. The Daytime Emmys air on Friday, June 24.