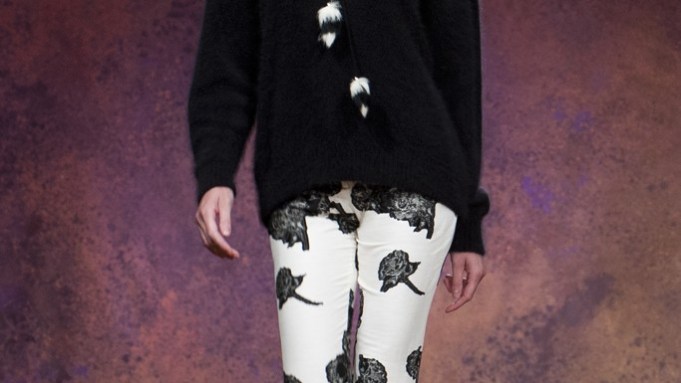 TAKING HOME THE GOLD: Designer Tanya Taylor, who made news this summer when First Lady Michelle Obama wore one of her dresses, took home the prestigious Gold Coast Fashion Award at the 59th Annual Charity Fashion Show at the Chicago Hilton.

Previous award winners have included the likes of Donna Karan, Bill Blass and Wes Gordon, and Taylor said she was honored to be in such company. And “more importantly, to be able to the support the work of the Children’s Service Board,” she said.

About 1,200 people attended the luncheon and fashion show, grossing $700,000 to benefit the Division of Pediatric Surgery at the Ann & Robert H. Lurie Children’s Hospital.

With each showing a capsule collection ranging from sportswear to eveningwear, six designers competed during the runway segment. They were Tia Cibani, Stacy Lomman, Giovanna Randall for Honor, Michael De Paulo and Charles Harbison, as well as Taylor.

Lomman, who worked in the Manhattan garment center for 15 years and was previously design director at Joan Vass, traveled from New York to participate. “It’s such a great cause tied to the Children’s Hospital. I’m happy to come out here and support it,” she said.

Last year’s award winner Ven Budhu, who also competed on “Project Runway,” said exposure at public events can have immeasurable benefits for a designer. “Being an up and coming designer is very difficult, it’s a very political industry,” Budhu said. “Fashion is one thing that keeps me going. But what was meant for you, no one can take that away.”

In addition to the competition, retailers took the runway as an opportunity to highlight designers they were promoting for the season. Neiman Marcus showed Veronica Beard, Nordstrom showed Lanvin, Frances Heffernan presented Ella Zahlan, Chalk Boutique showed Mathieu Mirano, and there were segments from McElroy Furs and Paul Stuart.