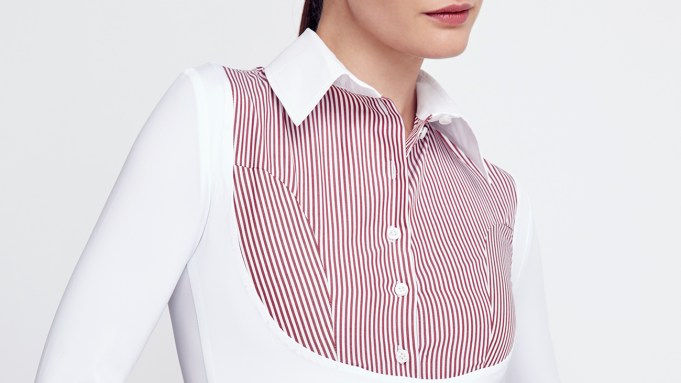 WHITE COLLAR JOB: Tired of cutting up her father’s tailored shirts and stealing the natty white collars and cuffs for her own outfits, Tara Palmer-Tomkinson has created a luxury onesie called the Kubbi.

The item is a slimming bodysuit with starched pointy collars and double cuffs that takes inspiration from traditional British men’s shirts. The Kubbi is made in England, and comes in solid black or white, or white with contrasting striped bibs.

The body is made from an eco-friendly technical stretch fabric while the collars, cuffs, and bibs are cotton. Some have been done in classic weaves, others in Oxford cloth.

Palmer-Tomkinson, the British socialite and celebrity TV presenter whose parents are old friends of Prince Charles, said the Kubbi was three years in the making because she wanted to make product that could last at least two decades.

“It’s all brilliantly made, so if you’re going to do a cartwheel, you don’t have to straighten yourself out afterwards. It just falls into place,” said the high-energy Palmer-Tomkinson in an interview.

The items are priced at 195 pounds, or $275, and sold via the company’s website DesiderataLondon.com.

The future is filled with even more collars and cuffs. “We have designed the next three collections already. We are in talks with certain airlines, designing custom collections,” said Palmer-Tomkinson, adding that the opportunities are rich.

“Think of the number of girls waiting tables today who are in crumpled and creased white shirts and probably really uncomfortable because they’re knocking things over and picking things up, If only they were in a nice snug Kubbi. What you’re wearing underneath really can represent how you walk, how your posture is, everything.”

Palmer-Tomkinson said that when she was doing her research before the launch, she couldn’t believe a similar product didn’t exist. “The closest you could get to it is actually a Playboy outfit, or something for a male ice skater.” She said many men have asked if she’s going to make a version of the Kubbi for them. “I love that.”

She also said she loves the idea of running her own company — finally. “I’ve always been orchestrated or directed to be what the program, commercial or brand wanted, and I’ve never done anything for myself, so this was a big departure.”

Palmer-Tomkinson has financed the project herself, had the lifestyle images shot at her family’s estate in Oxfordshire, and used her own clothes for the shoot. “I own every shirt in the whole business. I am the ceo and I’m really excited about it.”