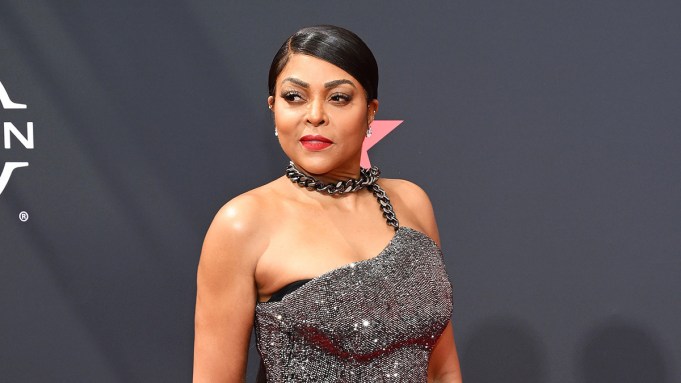 Taraji P. Henson is never one to play it safe when it comes to red carpet style. Keeping with her style tradition, the 51-year-old “Empire” actress walked the BET Awards red carpet on Sunday in Los Angeles wearing a glitzy look with edgy details.

Henson, who was styled by Jason Rembert, posed in a glittering gray Tom Ford gown on the red carpet, which was embedded with tiny rhinestones. The floor-length fitted gown, which had thigh-high slits on both sides, featured a thick steel chain strap extending from the left of the dress. Henson wore the lengthy chain strap wrapped around her neck like a scarf. For footwear, the actress wore open-toe black Tom Ford disco platforms, wrapping the shoe’s straps delicately around her ankles.

Henson wore her hair in a thigh-grazing ponytail, which helped show off her pear-shaped diamond stud earrings from Wempe NYC. The Oscar-nominated actress wore light-hued shimmer eyeshadow, accenting her makeup look with wispy eyelashes and a saturated red lip.

Henson is the host of this year’s BET Awards, which is the second time she’s emceed the show. She also took on hosting duties for the award show celebrating Black talent and culture last year. Prior to this year’s show, Henson teased that she will undergo several outfit changes throughout the night, making her Tom Ford look just the beginning of her BET Awards looks.

The BET Awards celebrate the achievements of musicians, actors, athletes and more throughout various entertainment fields. The first BET Awards took place in 2001 to celebrate Black entertainers and Black excellence. This year’s show features performances by Lizzo, Latto and Jack Harlow. Leading nominations include Doja Cat with six nods, and Ari Lennox and Drake with four nods each.