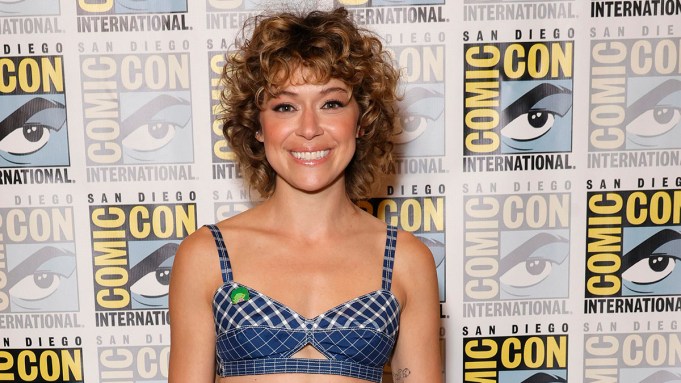 The 36-year-old “Orphan Black” actress wore a blue and white plaid bralette and skirt set by Tory Burch. The silk pleated skirt featured a two-toned plaid pattern — which was similarly echoed in the bralette top — and an ankle-length hem with a small side slit. To accompany the look Maslany wore black Tory Burch lug sole combat boots, which featured a chunky 4-inch heel and brass accents.

Maslany accessorized with a pair of silver chain bracelets and a smattering of silver rings. The actress also wore a cartoon She-Hulk pin fastened to her bralette top. Maslany wore her caramel-colored curly locks in a short shoulder-grazing style with curly bangs. For makeup, the “She-Hulk” star centered her look around a minimal blushed cheek and a simple black-lined lid.

“She-Hulk: Attorney at Law,” which is Marvel’s first half-hour comedy TV series, centers on Maslany’s character Jennifer Walters, a lawyer who is the cousin of Bruce Banner, The Hulk. After suffering a life-threatening injury, Walters needs a blood transfusion from Banner, which causes her to inherit his hulking powers. Though she excels at being an emerald “She-Hulk,” things get a bit complicated in her professional life when she joins a law firm specializing in cases involving super-humans. The first episode of “She-Hulk” is set to premiere on Disney+ on Aug. 17.

Comic-Con International is an annual convention famed for highlighting soon-to-released blockbuster movies, television and more notable forms of action, sci-fi and horror entertainment. The convention spans four days with this year’s event highlighting upcoming projects from Netflix, Marvel, Disney and DC Comics including “Black Panther: Wakanda Forever,” “Shazam: Fury of the Gods” and “Lord of the Rings: Rings of Power.”