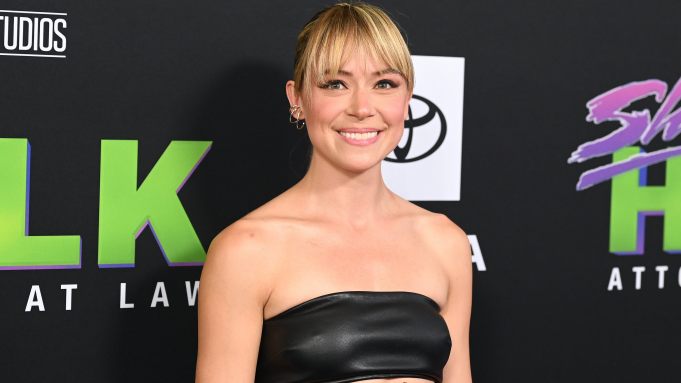 Tatiana Maslany had a standout fashion moment at the Los Angeles premiere of “She-Hulk: Attorney at Law.”

On Monday, the actress walked the red carpet of the El Capitan Theatre in a Rosetta Getty two-piece leather set that showed off her midriff. The look, which was from the label’s pre-fall 2022 collection, was complete with matching gloves. She styled her blond hair in a ponytail and kept her bangs down.

She was styled by Thomas Carter Phillips, who also works with Millie Bobby Brown, Chase Sui Wonders and Mia Isaac.

At the premiere, Maslany posed for pictures with her costar Mark Ruffalo, who reprised his role as the Hulk or Bruce Banner in the series. The show’s other cast members also attended, including Jameela Jamil, Renée Elise Goldsberry, Ginger Gonzaga and Josh Segarra, among others.

“She-Hulk: Attorney at Law” follows the story of Jennifer Walters, an attorney who specializes in cases involving superhumans as she becomes the She-Hulk, the female counterpart of the Incredible Hulk.

Wong and Cox will also reprise their Marvel Cinematic Universe roles in the show, playing Wong (the Sorcerer Supreme) and Matt Murdock or Daredevil.

“She-Hulk: Attorney at Law” is part of Phase Four of the Marvel Cinematic Universe and is slated to consist of nine episodes.