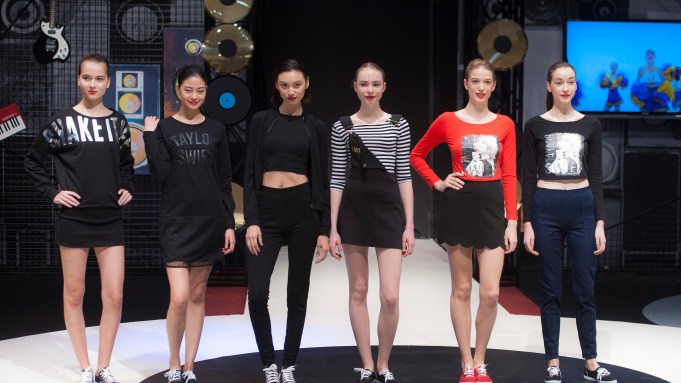 Hong Kong Fashion Week, which kicked off its three-day run on Monday, is not a generally a draw for international celebrities. But the trade event did manage to score a bold-faced name this season: Taylor Swift.

The singer herself did not make the journey east but her newly launched clothing line for the Chinese market staged a small runway show amid the booths of garment manufacturers. Nashville-based Heritage66 launched Swift’s brand last year on JD.com and Alibaba’s Tmall platforms in a bid to capitalize off the singer’s massive popularity in China and counterbalance the proliferation of fake Taylor Swift products flooding the market. Now Heritage66 is hoping retailers, both in China and other countries, will pick up the new brand.

The show — a mix of spring and fall merchandise — featured pieces like cropped T-shirts, body-hugging minidresses and slim pants emblazoned with the singer’s name or the letters comprising it.

Much of the merchandise had a sporty feel to it — like a short frock with a tie at the waist resembling the sleeves of a varsity jacket. The models bounced around the stage — decked out in musical instruments and faux records — to a soundtrack of Taylor’s hits like “Bad Blood,” “Blank Space” and “Shake It Off.”

Kate Liegey, chief operating officer of Heritage66, said she could not provide sales figures but said the line is seeing “phenomenal” success in its first few weeks on Tmall and JD.com.

“We realized that the demand was just incredible for the store business and we decided to do this show,” said Liegey, who added that hundreds of retailers from locales as diverse as Dubai, Uruguay and Mexico have expressed interest in the collection. “Everybody wants the product line.”