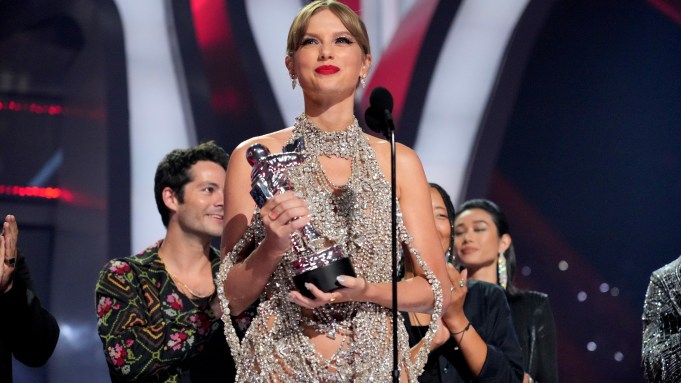 Another Taylor Swift era is coming.

While accepting the Video of the Year award at the 2022 MTV VMAs, the Grammy-winning singer announced she would be releasing her 10th studio album this fall. Hours later, she revealed “Midnights” as the album’s name.

On Sunday, Swift won the coveted honor for her “All Too Well: The Short Film” video, which accompanied the 10-minute version of her popular hit song “All Too Well” from her re-recorded “Red” album.

“I had sort of made up my mind that if you were gonna be this generous and give us this, I thought it might be a fun moment to tell you that my brand new album comes out October 21st,” Swift said toward the end of her speech.

She added, with a smile, “And I will tell you more at midnight.”

“Midnights, the stories of 13 sleepless nights scattered throughout my life, will be out October 21,” the caption read. “Meet me at midnight.”

The number 13 has always been significant in Swift’s life, calling it her lucky number and often referencing it through easter eggs in her music videos, songs and interviews.

Leading up to the VMAs, many Swifties, as the singer’s avid fan base is dubbed, initially predicted that Swift would finally release the re-recorded version of her “Reputation” album from 2017, especially since her “Look What You Made Me Do” song had already passed its five-year mark since it was released.

Her awards show look, which was an embellished draped crystal cocktail dress by Oscar de la Renta, was also reminiscent of one of the scenes from the “Look What You Made Me Do” music video.

She surprised fans when she announced it would be a brand new album.

Little is known so far about “Midnights,” but the project will be released on Oct. 21 and consist of 13 tracks.

Swift’s last re-recorded album was “Red (Taylor’s Version),” which dropped in November, while her last studio album, called “Evermore,” was released in December 2020, less than six months after the release of her surprise “Folklore” album.