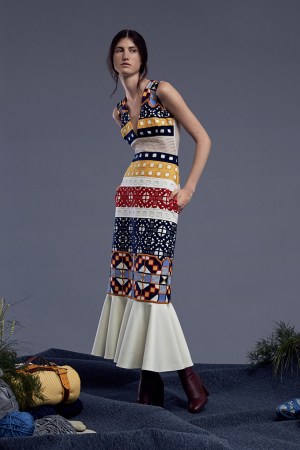 THE NUN’S TALE: Teatum Jones, the British label that scooped up the 2015-16 International Woolmark Prize for women’s wear, has launched its winning capsule collection at Harvey Nichols London, which is based on textiles from a mill founded by an English nun.

The 10-piece line, made from merino wool, was inspired by the blankets created by Foxford Woollen Mills in West Ireland, which was founded by Sister Agnes Morrogh-Bernard in 1892.

“She saw the mill as a way of creating a local industry post-famine era so that the local community who had previously relied on arable farming could continue to sustain themselves,” said Catherine Teatum, who designs the collection with Rob Jones.

Teatum’s parents live near the mills and she learned about the story during a visit. “She didn’t give up and it’s testament to her that the mill still exists today,” she said.

Passionate about textile innovation, the duo also convinced a French guipure lace mill to use merino wool in the looms instead. “They hadn’t done that in their 100-year history,” said Jones.

“There was a lot of trial and error and ups and downs, but we persevered and found the right yarn which worked and that formed the basis of the collection. If you want to position yourself within that field of pioneering textiles you have to be prepared to experiment with different yarns and make mistakes, and basically educate yourself in the science of it,” added Teatum.

Harvey Nichols fashion buying director Anita Barr said the duo’s “contemporary and fashion-forward collection not only showcases the craftsmanship of the designers but also the versatility of the yarn.”

Standout pieces include the Elizabeth dress with its vibrant, woven geometric patterns inspired by the Irish mill’s blankets and the Davitt biker jacket which incorporates similar motifs. The latter might look like a patent leather but is actually a bonded, foil-printed wool-lace yarn. “We wanted to create cool wearable, shoppable, wardrobe pieces,” said Teatum.

The duo is currently preparing for their debut on-schedule catwalk show during London Fashion Week in Sept., having previously staged presentations. “We’re looking at venues at the moment,” said Jones. “We like to create an experience with our shows, so the whole feeling of the space is really important to us when it comes to making it our own.”

Harvey Nichols is the U.K. exclusive stockist of the Teatum Jones Woolmark capsule collection. Prices range from $392 to $1,261.