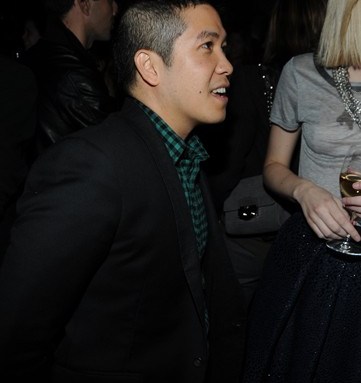 HOW TO SUCCEED: Rules to getting ahead in the fashion business are outlined by the biggest influencers in the industry in “The Teen Vogue Handbook: An Insider’s Guide to Careers in Fashion.” But on Tuesday night at the Gramercy Park Hotel’s Rose Bar, fashion insiders remembered ways they almost ended their careers before they could flourish. “There was a time where I put all of the furs on a Vogue shoot with Deborah Turbeville into the water, and the entire fur industry wanted to sue me,” admitted Vera Wang. “Another time we ruined a Frank Stella painting…we were shooting at night and I remember watching a model jumping up and down in front of a work of art that fell apart. It’s hard to put a number on it, but that work of art was worth a quarter of a million 35 years ago. That’s probably $3 billion now.”

Rachel Roy’s gaffe came while interning at public relations firm KCD: “I was to man the Marc by Marc Jacobs store, and I didn’t recognize Marc’s boyfriend and I didn’t let him in.” Amanda Brooks remembered putting the wrong gallery address on event catalogues while working for Larry Gagosian. “That was a pretty big f— up. Needless to say I got told off. Big time. Big. Time. Doors slammed. Swear words were said.”

J. Crew creative director Jenna Lyons remembered when gossiping in the workplace earned her a scolding from then-coworker Josh Patner, who later cofounded Tuleh and is now a writer. “I did something really stupid with Josh where I talked about something with a friend and it got back to him. And he pulled me into a closet and said, ‘You dumb little girl!’ Gossiping wasn’t appropriate.” Some attendees at Tuesday’s event showed up with youngsters, who are the book’s prime targets, including Patrick Demarchelier and his sons, Victor and Arthur; Arthur Elgort and his daughter; Yvonne Force Villareal and her son, and Helen and Tim Schifter and their daughter Storey, who mingled with Chanel Iman, Thakoon Panichgul, Steven Kolb and Justin Giunta.

NOBLE EFFORT: It’s been a busy — and philanthropic — week for Evelyn Lauder. On Wednesday, Lauder joined Stephen I. Sadove at Café SFA on the top floor of Saks to host a kickoff lunch for the retailer’s Key to the Cure Initiative. The annual event, which starts Friday, benefits various national and local women’s charities including Lauder’s Breast Cancer Research Foundation. Emmy Rossum, Sela Ward and Becki Newton were among those on hand for the luncheon, where each guest received a Michael Kors-designed Key to the Cure T-shirt.

To date, BCRF has raised more than $252 million to support cutting-edge research aimed at eradicating the disease.

HEADING EAST: American designer Jason Wu, who was born and raised in Taiwan, is finding there’s no place like home. Wu flew to Hong Kong to launch his collection exclusively in Lane Crawford with a private trunk show in the store’s Platinum Lounge. Executives said the event is oversubscribed, with many women clamoring to purchase complete Wu looks for a private dinner to be held tonight. “Asia is extremely important, but in the past it was always head-to-toe big brands. Now they enjoy mixing brands, mixing casual pieces with luxury pieces,” Wu told WWD before the event, which gives shoppers the chance to preorder the spring-summer 2010 collection. Wu will head to Beijing next to launch his line in Lane Crawford’s flagship there; it will be his first time in China’s capital and he’s excited to go. “I’m going to the Forbidden City — I will just be a tourist for a day,” he said, acknowledging that his meteoric rise has a lot to do with Michelle Obama’s patronage. “She brought the brand to everyone around the world who has a TV,” he said. Still, he intends to roll out slowly. “We’re only three years old. You can only launch a brand once, you have to do it right,” said Wu.

LATIN CLASS: These days a black tie dress-code doesn’t necessarily mean much, but at the Fiesta for the Casita Maria Center for Arts and Education, held at the Mandarin Oriental Hotel on Tuesday night, guests — including Latino New Yorkers like Zani Gugelmann, Christian Cota, Brian Reyes and Dayssi Olarte de Kanavos — meant business. According to revelers, the trains, bold baubles and elaborate updos were to be expected given the crowd. “Latins take it to another level,” said Gugelmann, who is half Peruvian. Jamee Gregory noticed. “Latins do everything up — the hair, the makeup, the clothes,” she said. “It’s not like me, who slaps myself together in seven minutes.” But the elaborate formal attire didn’t hinder guests’ mobility, as many spent the evening cutting a rug to Latin standards like “La Bomba” and “Oye Como Va.”

TARDY FOR THE PARTY: Built for punctuality, Breguet’s custom-made watch for Marie Antoinette came just a little too late. In 1783, one of the notorious French Queen’s admirers commissioned the watchmaker A.L. Breguet to create a master timepiece for her. The watch incorporates multiple complications such as a minute repeater, perpetual calendar, power reserve indicator and a bimetallic thermometer and took 44 years to create, but the Queen never got to see it. It was finished 34 years after she was beheaded at the guillotine in 1827.

The timepiece, Breguet’s most famous, has a storied past and has passed through many hands over the years until it was stolen from the L.A. Meyer Museum in Jerusalem in 1983. Breguet chief executive and Swatch Group chairman Nicolas G. Hayek, a patron of the restoration of Marie Antoinette’s favorite spot in Versailles, the Petit Trianon, was so romanced by the tale of the watch that he had it reproduced in 2007. The reproduction, dubbed Marie Antoinette No. 1160, will be on display for the first time in the U.S. today through Saturday at Breguet’s boutique in Beverly Hills and from Oct. 19 to Oct. 21 at the firm’s Madison Avenue boutiques in New York.