Diversity, inclusion and feminism were toasts of the evening. 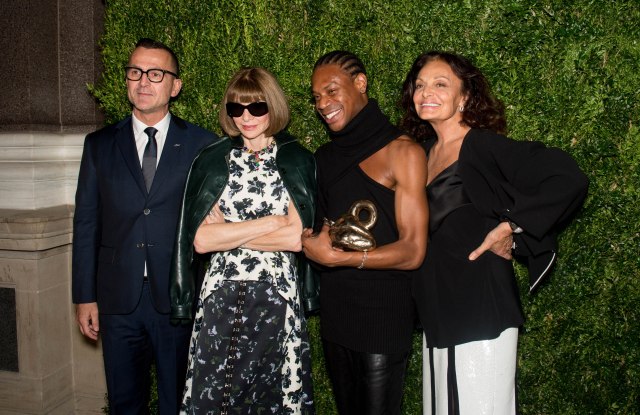 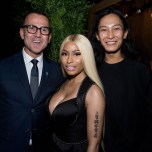 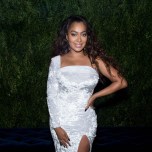 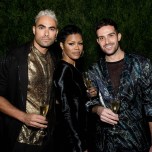 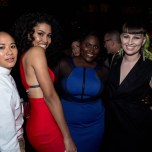 Despite what’s happening in the world at large, it’s the era of inclusion in fashion. That message almost trumped the fostering of new design talent at the annual CFDA/Vogue Fashion Fund dinner and awards held Monday night.

“Diversity is very important,” said Diane von Furstenberg, CFDA chairman. “This year I’m proud to say our group of finalists is the most diverse it’s ever been since we started 14 years ago.”

If a bit on the nose, the evening’s venue, The Weylin in Williamsburg, seemed to hammer home the theme of progressivism — just in case the creative interpretations of the “dress up” dress code didn’t.

David Moses, a finalist and member of the collective Vaquera, wore a halter dress assembled from a chainmail of fake credit cards and a pair of striped undies from the label’s spring collection. Vaquera also dressed K-pop star CL in a white terry-cloth bathrobe cut in ballgown proportions. She looked snug as a bug, though Moses admitted his dress was “so uncomfortable.”

The top prize of $400,000 went to Liberian-American designer Telfar Clemens of Telfar, who launched his unisex line in 2005. “I just want to thank everybody for being down,” he said, accepting the award. “I know it’s been a hard, long road but that’s what pioneers do. This is coming back to Queens.” The two runners-up were Ahlem Manai-Platt of Ahlem Eyewear and Becca McCharen-Tran of Chromat, who received $150,000 each.

Last year, the CFDA/VFF fell on the eve of the presidential election. All the chicken pot pie entrées were served with HRC flags. Making up for that loss in some way, von Furstenberg and Vogue’s Anna Wintour, two of the industry’s biggest forces of nature who also happen to be female, made women a key topic of conversation.

Wintour followed von Furstenberg’s remarks by flexing her sense of humor while celebrating DVF’s unique, female-minded DVF-ness. After comparing her to “a combination of Aphrodite and Athena,” Wintour let the audience know what it’s like to be on the receiving end of an e-mail from von Furstenberg, reading two messages aloud.

“’Anna, jet-lagged. I’m in Santa Barbara at Amazon campfire. I think it’s time for women to shine before humans totally surrender to artificial intelligence. Miss you, Diane,’” went one. “’Anna, the world is insane. I’m in the Galapagos on the boat. Women really have to fight for their rights. We are so much smarter and stronger than men. If you need me, just whistle. Love you, Diane,’” went another that was met with wolf whistles and applause.

Keeping the vibe consistent, Vogue’s Hamish Bowles interviewed the evening’s keynote speaker, Maria Grazia Chiuri, on ushering in a feminist tenure at the hallowed house of Dior. Bowles asked Chiuri about growing up in an Italian culture where sexism was enshrined and the fact that some questioned Dior appointing a woman creative director.

“When I started to study fashion, I never imagined it would be possible for me to arrive in this position,” she said. “I think I have a big responsibility for women because, in the past, I believe for woman it was hard to define themselves.…I think the designer is someone who has a dialogue with women, not someone who imposes a point of view.”

Bowles then asked what advice Chiuri would give her daughter “about making a place for herself in a world that is in some ways still very male-dominated?”

“To be brave,” she replied. “To believe in yourself.”

And to be wary of other people’s advice.

“You have to do what you feel is right for you,” said Chiuri. “I think it’s good if it’s your mistake.”