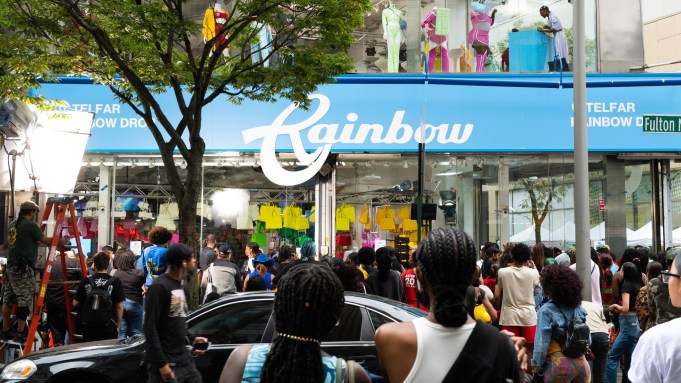 Is it a K-pop star? Beyoncé? Harry Styles? No — it’s thousands of Telfar shopping bags.

Rather than stage a New York Fashion Week show, the brand took a more inclusive approach: it shut down traffic in downtown Brooklyn on Sunday afternoon with its first pop-up shop dedicated to handbags, allowing customers to buy the viral design in-person.

Telfar Clemens teamed with Rainbow — the nationwide fast-fashion chain — as the pop-up location. The Rainbow on Fulton Street was cleared of every last neon, fishnet legging and cropped corset top to make way for Telfar bags in all sizes and colors — creating a literal rainbow of accessories across the store’s two floors.

Thousands lined up for the chance to buy a maximum of five bags in their size and color of choice. Up to 100 shoppers were allowed in the store at a time in 10-minute intervals, initiating a kind of Supermarket Sweep frenzy as soon as they crossed the threshold. Clemens himself spent the afternoon waving to his fans in line from Rainbow’s upstairs window.

Janice Gooding was among those waiting in line in the pouring rain for hours and said it was worth it, considering that the event was a “major moment.”

“Just the fact of even having this in a Rainbow — if you are from a certain area, you know that’s where you go for your fashion. To have it here is so monumental — it’s for an everyday girl who is also a material girl,” she added.

Fellow Telfar-goer Deanna Thomas said she turned up because of what Telfar and Rainbow both mean within her own community. “I’m a really big fan of Telfar, I saw it on Instagram and said, ‘we have to go’ because it can be hard to get the bags online.

“Rainbow is something in our neighborhood, people shop here and it’s very inclusive for people who live in New York. For me this just symbolizes inclusivity. Rainbow is like Fashion Nova but it’s a [physical] store, so it’s actually really nice,” she said.

Rainbow, founded in 1935, has more than 1,300 locations across the United States and annual sales exceeding $1.5 billion. Each location, however, has a neighborhood feel that plays to the wider community around it.

Telfar’s employees and friends at the pop-up all wore special collaboration T-shirts celebrating the Rainbow tie-up, but its unclear if that merchandise will become available for sale.

Next up, Clemens is planning an online version of the Rainbow bag drop for those who couldn’t make it to Brooklyn, slotted for Sept. 23 on his brand’s website.