Asprey purse auctioned off at Christie's in London for charity. 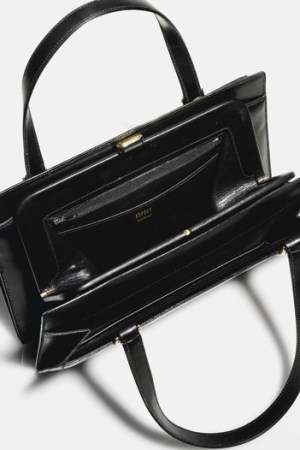 HANDBAG ECONOMICS: Margaret Thatcher’s boxy handbags were an intrinsic part of her Iron Lady image during her tenure as British prime minister in the Eighties — and now they’ve become prized collector’s items. On Monday night, an Asprey number from her collection fetched $39,800 at a charity auction at Christie’s in London, organized by the politician and author Jeffrey Archer. Thatcher owned the handbag for more than 30 years, and was pictured carrying it when she met former U.S. President Ronald Reagan in 1985 during a trip to America. Proceeds from the sale benefit Combat Stress, The British Forces Foundation, and Debra, which helps those with genetic skin conditions. It was sold via a telephone bid to a Cypriot client who was a university student in the U.K. during the Thatcher years, and whom the auction house described as “a big fan” of the former prime minister.