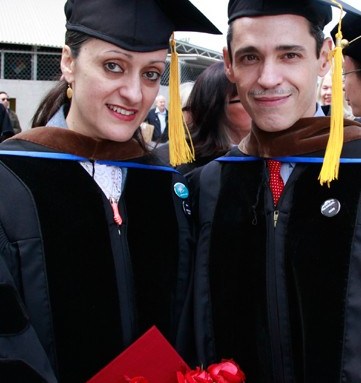 THE DOCTORS ARE IN: On the eve of receiving honorary doctorate degrees from Los Angeles’ Otis College of Art and Design, Isabel and Ruben Toledo were all ready to fulfill the responsibility the title bestows. “If you don’t feel well, you can come to see us. We’re doctors,” Ruben said at Otis’ gala on Saturday night at the Beverly Hilton Hotel. Joined by Bob Mackie, Trina Turk, Robert Rodriguez, Bijan Pakzad, Todd Oldham, Koi Suwannagate, Patagonia founder Yvon Chouinard, Beverly Hills Mayor Jimmy Delshad, Armani Exchange designer Michael Maccari, White House decorator Michael Smith and Disney artist Tyrus Wong, the Toledos helped raise $950,000 for the school’s scholarship fund. Ruben urged the graduating students to retain their individuality, even in the challenging economy. “Be very individual and sincere,” he said. “People can see through the formula.”

HEADING UPTOWN: The ink is barely dry on the lease, but Brooks Brothers has signed a deal to open a store on Madison Avenue and 86th Street in the Carnegie Hill section of Manhattan. The 3,000-square-foot unit at 1180 Madison will be about the size of the company’s Rockefeller Center store and is expected to carry the company’s newly revamped and expanded boys and girls collection, Fleece, in addition to men’s and women’s. The Upper East Side unit, which has 100 feet of frontage on Madison Avenue, is expected to focus on “highlights” of the collection, a spokesman said, targeting the residents of the neighborhood. “Madison Avenue between 86th Street and 92nd Street is becoming a significant shopping street,” Robert K. Futterman, founder of the firm bearing his name.

VINTAGE GETS EVEN COOLER: Nigo, the Japanese designer and businessman behind the cult hip-hop label A Bathing Ape, is trying his hand at vintage. The fashion impresario just opened his take on an upscale consignment shop in Tokyo’s Omotesando Hills mall. Nigo hand selects the merch for the store, which is called Pass the Baton. Items on offer include sneakers taken from the BAPE archives, Pee-wee Herman dolls, vintage jewelry, rare books and other cool finds. Among the more expensive items up for grabs is an old carousel horse, which is tagged at 1.365 million yen, or about $14,500. Nigo opened his first Pass the Baton outpost last year in Tokyo’s central Marunouchi district.

HAIR TODAY: A federal judge on Monday dismissed a lawsuit brought by a former Abercrombie & Fitch saleswoman in New York, who accused the teen retailer of discriminating against her because she had dyed her hair. Alleging her supervisors at the company’s Fifth Avenue flagship told her to redye blonde highlights in her hair because they looked unnatural, Dulazia Burchette first filed suit against her former employer in 2008 in U.S. District Court in Manhattan. Burchette, who is African-American, asserted in court papers the company paid no such notice to white workers with multitinted hair. In his order dismissing the case, District Court Judge Richard Berman wrote Burchette had not produced any triable evidence that she had been treated more severely than similarly situated coworkers. Berman also concluded the plaintiff hadn’t satisfactorily raised her claim that she had been retaliated against for complaining about the way the company enforced its look policy, among other findings. The judge had previously dismissed Burchette’s other claims in the suit, including conspiracy, constructive discharge and those against her individual store supervisors.

BERGDORF GIRL: Pessimists take note: perseverance does pay off. After designing six collections for her namesake line of eveningwear and cocktail pieces, Alexandra Vidal is marking Bergdorf Goodman’s recent purchase of her fall looks with two days of trunk shows, Thursday and Friday, on the store’s fourth floor. The Miami Institute of Art and Design graduate and “Project Runway” alumnus has dressed the likes of Arriana Boardman, Emilia Fanjul Pfeifler and Zooey Deschanel (not to mention Blair Waldorf on episodes of “Gossip Girl”).

QUITE A GIFT: Lord & Taylor is sporting a new accessory, tote bags made in Guatemala, and got a surprising run on them last week. “One woman came into our Scarsdale store and bought 125 to give out at a bar mitzvah,” said Brendan Hoffman, L&T’s president and chief executive officer, who greeted moms and their kids at L&T’s afternoon tea Friday celebrating Mother’s Day and supporting UNICEF’s efforts to provide nutrients for undernourished Guatemalan children through the sale of the totes as well as Guatemalan cosmetic pouches. L&T has partnered with Feed Projects, founded by Lauren Bush, to exclusively sell the products. The bags and pouches come in a variety of colors and woven patterns reflecting Guatemalan culture, and cost $39 and $19, respectively. Among the crowd supporting the cause and buying the bags was Dina Chartouni and her daughter Isabella, who said she created the Be-a-Part campaign to raise awareness about child marriages. Isabella said that with her friend Cami Winding, they’re launching a Web site, selling T-shirts and will do a documentary to fight the problem.