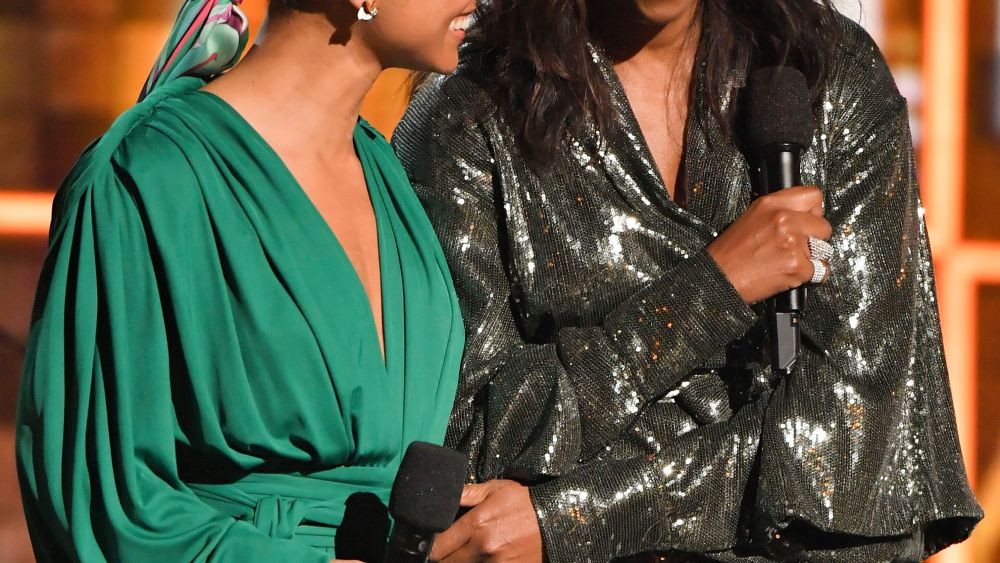 While the red carpet at the 61st annual Grammy Awards had its fair share of standout moments — Cardi B a high-fashion Venus de Milo in a vintage 1995 Thierry Mugler shell-like gown and Janelle Monae in a sharp-shouldered Jean Paul Gaultier couture dress — the most memorable parts of the Grammys came during the telecast itself.

Absent from the ceremony, Ariana Grande still made headlines Sunday night despite not attending or performing at the Grammys. The singer, who just released her latest album, “Thank U, Next,” on Friday, went to her social media accounts to post pictures of herself in the custom Cinderella-esque Zac Posen gown she would have worn to the Grammys. Grande decided against attending the show because of disagreements she had with the producers over what songs she could perform during the ceremony.

From an appearance by former First Lady Michelle Obama and a Diana Ross celebration to a very Lady Gaga performance to Cardi B becoming the first solo woman to win Best Rap Album, here are the most memorable moments from the Grammy Awards.

The night started on a high note with host Alicia Keys bringing together former First Lady Michelle Obama, Lady Gaga, Jada Pinkett Smith and Jennifer Lopez on stage to talk about the importance of music.

After performing “Money” on a crystal-studded piano, Cardi B went on to win the Grammy award for Best Rap Album for her album “Invasion of Privacy,” making her the first solo woman to win the award. The rapper accepted the award on stage next to her on-and-off husband, rapper OffSet.

While Bradley Cooper was representing “A Star Is Born” at the BAFTAs in London, Lady Gaga took the stage at the Grammys to perform the hit song from the film, “Shallow.” The singer took on both roles in the duet, putting her own Lady Gaga-esque spin on the song with a rock-’n’-roll edge and dressed in a bedazzled jumpsuit. Gaga also picked up three Grammys, two for “Shallow” and one for her song “Joanne (Where Do You Think You’re Goin’).”

Clad in futuristic latex outfits, Janelle Monae and her dancers gave a memorable performance for her “Dirty Computer” single, “Make Me Feel,” complete with references to Michael Jackson and Prince. Monae also brought out dancers wearing the iconic pants from her “PYNK” music video.

5. Camila Cabello kicks off the show paying homage to her grandmother’s childhood in Havana, Cuba

Singer Camila Cabello became the first Latina to open the Grammys with a rendition of her hit song, “Havana,” which referenced her grandmother’s childhood in Cuba. Cabello was joined by Ricky Martin, J Balvin and Young Thug in a performance that included an elaborate playhouse and jazz trumpeter Arturo Sandoval.

Introduced by her grandson, Diana Ross hit the Grammys stage in an extravagant red ballgown to celebrate her 75th birthday with performances of “The Best Years of My Life” and “Reach Out and Touch (Somebody’s Hand).” Ross was cheered on by her daughter, Tracee Ellis Ross, who was sitting in the front row.

Andra Day, Yolanda Adams and Fantasia Barrino gave the last Grammys performance of the night with a tribute to the late Aretha Franklin, who passed away in August. The trio took turns singing verses of the Queen of Soul’s “(You Make Me Feel Like) A Natural Woman.”

Grammys 2019: All the Red Carpet Looks